I'm probably the only bass player in the world who still has his first bass, bought in 74, with the original strings. In fact, I own 5 basses - and the only strings I have ever put on were on my Fender American Standards Jazz when I decided that fluorescent ones looked great on stage. I have never broken a string, and as I hate the twangy bright bass tone, I'm very happy with the electric basses sounding old. On the DI front - the only real thing I need them to do is be transparent and have an earth lift switch. I'm not Toine deaf - I did put different pickups on the Jazz when I put on the coloured strings - they're wrapped, which means the tone is a bit mellow - Even mellower than I like - so I put some brighter pickups on it. This difference I can hear very clearly. The difference between DI's? No. In fact on stage just before Covid wrecked things, I experimented with DI only - losing the 8 x 10" cab I used on big stages, or the 2 x 10" or 4 x 10" for smaller ones. With my in-ears, the DI is fine, and better in my ears than a miked up cab, or the DI socket on the amp, I think.

I remember reading that one of the Wrecking Crew bassists kept the same old strings on his bass. That was his "secret sauce" to get his sound.

A couple of years back, I was redoing the bass on a few "live" songs where the bass was badly played. I pulled out my Line6 PODxt and used the Fender Bassman model. It worked nicely.

In the 40 years I've been playing bass, I think I've bought 4 sets of strings and as far as I can recall, maybe 2 individual strings, one to replace a G string that snapped after I experimented with boiling my strings back in the 90s and a lower gauge flatwound B to go on my current bass back in 2019 because the string that came with that set was so thick you could barely tell the diiference between the bottom 5 notes !
I'm the same with guitar and mandolin ~ I only replace the strings when they break.....and that's if I can't repair it, which I can, depending on where the break occurred.
But it's not some magical secret that leads to some magical pristine tone. My only concern is that my instrument is in tune and sounds like the instrument it's supposed to be.

Rob: Don't know. I have read that a cheapo DI can add a bit of attitude to both guitar and bass (else why do Radial charge spare limbs for ultra clean ones?) but it might be just another guitar myth! I would say it is at least one that has some basis in theory, crap transformers do distort and it is proportional to the inverse of frequency.
Click to expand...

Ok, the line6 has a transformer...I think. They do a surprising job direct with a PA.

Transformers, this guy I knew was into broadcasting and high school radio station. He built his own kit stereo. Kit preamp. Kit microphone. One thing that was cool is his transformers he would wind himself. They had a particular sound. A rumble in the lows. Distortion was happening. He told me that he purposefully wound the transformer so the coils are loose. There might be more to this.

I put some new Fender roundwounds on my Yamaha PJ and the E is spikey in spots (frets 2-5). I plugged in AmpliTube's Fender Bassman 300 with default settings - flat EQ - and it's smoothing it out quite a bit. Also parallel processing with Reaper's ReaComp - haven't settled on the blend yet.
T

One other thing to consider when going direct, is you often are recording a huge amount of subsonic and extended low frequencies that smear your sound on playback and eat up a lot of headroom.

Try using an EQ with a High Pass Filter and set to 30-40 hz and slowly move it up towards 80-90 hz (depending on the Genre and notes played)
You may find the woof disappears.
B

mcmac74 said:
I'm often struggling to get a decent bass tone on my songs. They often sound 'woofy' or 'flabby' The strings are in decent nick and I'm not quite sure where I'm going wrong. I record DI into a focusrite solo and have tried a couple of plug ins along with reapers own cockos compression preset for bass. Any tips, tricks and advice would be greatly appreciated!

Hey Mark, I just did a huge project for a major children's publisher. I had to record four 45 second music beds -- bluegrass, surf, R&B and reggae -- over which we are dividing the 26 letters of the alphabet, adding vocals and sound effects for the animators. Projects like this are the last home for old power pop guys like me, resurrecting cool old sounds and recording techniques for the kids. Hopefully we subvert some young minds along the way over to cool sounds...but I digress...

One night I was going down a YouTube rabbit hole when I found a video by Boulevard Recording in LA, where the owner shows you how they recorded McCartney's bass at Abbey Road in the mid-late 60's. They put him through an amp, of course (VOX in the early days, 50w Fender Bassman from about '67 on), but they put a big condenser in front rather than a dynamic mic, and kind of pointed it down at the polished floor in front of the amp. Hmmm.

My bass amp is out of service at present, so I used a little Fender 15 watt Rumble practice amp, put it in the shower of the loo off the studio which I use as an amp chamber, with a KEL HM2D about 2 feet from the grille, capsule angled toward the ground in front of the amp; I believe I was using a Joemeek TwinQcs pre. We also took a D/I out and put it through Brainworx's free Ampeg SVT plug in, plus a bit of Altec compression. By combining the two signals we got a fantastic sound...full, punchy, warm and articulate with plenty of bottom end.

I've also had a lot of good luck exploring the presets various plugins have for electric bass. Even when I'm in a rush and don't have an hour or two to devote to getting a good bass sound, I can almost always find something usable. Also, check out Brainworx's free Cleansweep V2 plugin, a simple, effective and good sounding high pass/low pass filter that I almost always use on my bass signal.

We alternated between three basses, btw: a partscaster P-bass, a '67 Epiphone Rivoli medium scale, and an old Fender Mustang the previous owner had modified with a Barden style rail pickup. The first two have flat wounds, the Mustang has rounds.

If you're going to go this route, remember that small amps record huge; you don't need a bloody great stack of hulking cabinets sporting lethal arrays of 15" speakers to get a big sound! Good luck, and try to remember to have fun.

rob aylestone said:
I love the idea that distortion can help - Steve Harris? Yep - I get that one. Carol Kaye and Paul McCartney? Struggling there.
Click to expand...

It surprised me a bit to listen to isolated bass tracks of Beatles music to find that often there's mild but quite noticeable overdrive happening. It's not that obvious in the full mix, but the bass sits well and plays nice with everything else.

It's one of the things I like about the GK RB series bass amps. The Boost control will gradually start to get crunchy as you turn it up, but it's subtle until you get past 9 or 10 o'clock. Seems to help.

snow lizard said:
It surprised me a bit to listen to isolated bass tracks of Beatles music to find that often there's mild but quite noticeable overdrive happening. It's not that obvious in the full mix, but the bass sits well and plays nice with everything else.

It's one of the things I like about the GK RB series bass amps. The Boost control will gradually start to get crunchy as you turn it up, but it's subtle until you get past 9 or 10 o'clock. Seems to help.
Click to expand...

That’s likely the REDD console they were recording on that gave the overdrive.

snow lizard said:
It's one of the things I like about the GK RB series bass amps. The Boost control will gradually start to get crunchy as you turn it up, but it's subtle until you get past 9 or 10 o'clock. Seems to help.
Click to expand...

Yes, Bob Gallien did bass amps correctly. Bassists had to wait until 1983 to get portable proper sounding bass amplification. Then the MB series was released which offered the GK growl in a tight little package. It was the RB micronized.

The RB is on a ton of hits. Whats the REDD?
R

Bassists had to wait until 1983 to get portable proper sounding bass amplification.
Click to expand...

My first bass amp in 1974 sounded pretty good but was too quiet, in 76 I could afford a better one - A second hand Fender Bassman with 2 x 12" speakers. Then a new 1 x 15 compact - which was bassier but a bit thin sounding for me. These all sounded pretty good, I thought!

But a Fender Bassman is huge. This MB was a practice amp for your bedroom or taking to lessons. 150 watts. RB pre. 12 inch. FX loop. Only bass amp choice for 1980's and portability. Not aware of anything else that comes close.

The MB was a tight little package. Aluminum combo. I liked the lightweight aluminum cabinet idea so much, I bought GK aluminum enclosures for the guitar to match. I loaded them with Celestions. 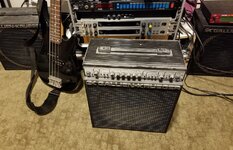 So small and light it has a bracket to mount atop a normal microphone stand.
R

Never seen one of those over here, and I love the idea of a metal box, and aluminium is a terrific idea!

To have a small rig for playing music and a large came in very handy.

They were awesome , even back then.

Seems to me that Ampeg made a bunch of nice bass amps. Those old Portaflex fliptops are on a bunch of recording pre-1980. They weren't massive, you could put them in the trunk or back seat of most cars from the 60s or 70s. 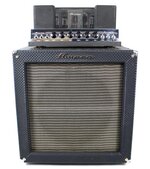