sweetbeats said:
So sometimes you have to do that. If you have any Teflon tubing or even vinyl tubing or heat shrink to put over any longer exposed tails of the radial cap you should do that.

Thank for the compliments, but the credit goes to a couple smart guys that were more than helping me. I learned a lot. There really were three main components to the ground mods...localizing all the grounding to each of the channel cards and jack PCBs, eliminating all the ground loops on the channel cards, and completely revising the grounding between the power supply and the frame. Oh and I guess there would be a fourth component, positively bonding all sections of the frame to each other and the PSU chassis to that...it’s kind of a mess from the factory but that wasn’t necessarily uncommon.

No. It’s not about putting them in cooler air; placing them lower in the chassis. That’s completely inconsequential. It’s about allowing heat to escape. If you put them under the PCB it’s like adding a layer of insulation over them. And the heat transmission via a heat sink is orders of magnitude more effective than radiating heat into the air space. The bridges really really really need to be bonded to a heat sink.

That’s too small. Typically one would use something like 0.01uF for HF filtering.

You’re not literally using fuses there right? Those are light bulbs...fuse style incandescent lamps. I don’t recall if the lamp circuit there is powered by AC or DC, but if it is DC then you have to mind the polarity of the lamps. So verify you’ve got the right type of lamps, that they are all good, and then look in your service manual to verify the lamp power rail type (AC or DC) and if DC make sure you’ve got the lamps oriented correctly as far as polarity.
Click to expand...

regarding the bypass caps, i based it on your post which stated you used 0.022uf ceramic caps?

Not sure if MX is different but in MRX they are actually 4 x 15amp 6.3v glass fast blow fuses directly behind the logo which i would assume makes it glow as there is nothing else there other than fuse clamps. I guessed would be on DC but i will certainly check that thanks

Ok so i think i will look for some heatsinks to do the same as you did then.. To clarify, did you literally mount them in same points on pcb but underneath or did you extend wires and mount the recs directly onto rear panel chassis to connect to modded heatsinks, sorry for lots of questions, couldn’t tell from your photos... Appreciate the guidance : )

Regarding the bypass caps, i based it on your post which stated you used 0.022uf ceramic caps?
Click to expand...

Yes, that’s right...that’s what I used. That value is also an okay value to used for that application...I think I used those because it’s what I had in some quantity from something else and I got the green light from my helpers. Typically though what you see in filtering applications like this is 0.01uF. And I see your subsequent post where you identified you were about to put in 0.0022uF. It’s not that that wouldn’t work, but 0.01uF would be better. The idea here is those larger electrolytic caps in the power supply, those are the filter caps. The power that comes from your wall outlet may have noise or other interference present, and then it goes through the bridge rectifiers which converts the AC power to unregulated DC power. Unregulated means, in part, the power is dirty. If you ever look at the power with an oscilloscope right after the bridge you’ll see it’s not a nice straight line as you would see with clean DC power. It still has some wave form to it. The filter capacitors smooth out that waveform so you get clean DC. They do this because capacitors block DC power and pass AC power. Those filter caps are strapped between their respective unregulated DC power rail and ground. Look at the PCB and you’ll see this. So the filters pass AC to ground but block DC to ground...AC artifacts still present after rectification are passed to ground, leaving filtered DC power to continue on through to the console. Electrolytic caps are nice because they have a relatively small package compared to the capacitance value. And they’re cheap. The compromise though is the bigger in value they get, the less effective they are at filtering high frequencies, and in this case that may be very high frequencies from RF interference, etc. So to help them out, we put a small value cap in parallel which does the part of filtering those very high frequencies. So that’s why you are adding them, and why you typically see them already there in other designs. Film caps do a better job with a wider frequency spectrum, so in theory you could just use a film cap for your filter, but the theory falls flat when you quickly learn how expensive large value film caps are, and how physically large they get. For instance a 2,200uF film cap will set you back $300 USD each, and are 340mm in length. Now you see why electrolytic asked are great...cheap...small...especially when they can effectively do their job with a little help from another small cheap part.

Not sure if MX is different but in MRX they are actually 4 x 15amp 6.3v glass fast blow fuses directly behind the logo which i would assume makes it glow as there is nothing else there other than fuse clamps. I guessed would be on DC but i will certainly check that thanks
Click to expand...

I see you figured this out. Right...not fuses, fuse style lamps. You’ll likely never ever see a fuse filament glowing because it will never get to that point long enough to see it...it will do its job and break continuity as the filament burns up.
I don’t know what voltage lamp you got...I’m not positive but it looks like the lamps are powered by 12V AC. You’ll need to see how brightly your lamps you bought burn and if they get too hot. If they are too bright you can look for a higher voltage lamp or a lower current.
If I’m correct and the lamp power rail is AC you won’t have to worry about the lamp polarity.

Ok so i think i will look for some heatsinks to do the same as you did then.. To clarify, did you literally mount them in same points on pcb but underneath or did you extend wires and mount the recs directly onto rear panel chassis to connect to modded heatsinks, sorry for lots of questions, couldn’t tell from your photos... Appreciate the guidance
Click to expand...

The new bridge rectifiers were relocated to the backplane, positively bonded to the chassis using machine screw hardware, and with a thin layer of thermal conductive paste between the component and the chassis. 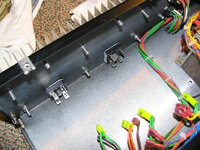 Enjoyed this information on the caps ; )
I have some orange Phillips poly caps in my box of bits, 0.01uF, 400v.. Prob overkill on the voltage but would they do the trick for the bypass filtering?

I spoke with Tim at Studiosystems and he confirmed that the fuse lamps are on DC 24V. Quite hard to find some replacements, there is one place here in UK that are checking stock for me. I have been looking at LED drop in replacements also but all goes a bit over my head to be honest, not really sure if they will work. Tim says they are just car lamps, festoon, and to buy a separate 5V PSU and put an LED strip in, an option also but prefer to use the existing setup than run something in just for that..

Thanks for the picture, for now i have replaced the rectifiers with a like replacement and cut new wire and reapplied a better thermal paste. I will find a heatsink and go for that mod. Those rectifiers look much better than the stock. So could i drop any rectifiers in there? I think the replacements i put in were rated 200v, 8amp.

Finished installing the larger caps, just waiting for the delivery of the others. Was a bit tricky as the leads would not reach through holes, had to twist them onto the old caps leads 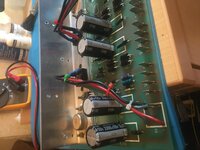