This morning I was fed up but I've tried to spend time in the studio this afternoon; twice as this morning got seated and started playing twice pulled away; three times so far today I've failed to play my violin I wonder if it will be fourth time after tea this evening; I don't have a mobile phone welded to my ear so it's the landline and I can't ignore incoming calls in case it's the hospital or surgery; even the bank phoned yesterday to check a withdrawal; no peace being retired. I find it impossible to concentrate. Retirement = punishment.

Why do I complain so much?

You'll get there Colin.
R

Many thanks @Slouching Raymond for your continuing encouragement; much appreciated.

I wandered into the studio at 7pm yesterday it being the fourth attempt; having had so much hassle all day I couldn't settle expecting to be called away again so I quit.

The Howard rotavator arrived this morning to cheer me up but I couldn't spend time inspecting it; I came back into the bungalow because there's an hospital phone call still hanging over me and I don't want to miss it because it could be important; I'm not under any treatment so don't know what the phone call was about yesterday that I just missed and I couldn't return the call; anyway will I get into the studio later today?

The Yamaha YEV 104 still has the original strings fitted but on YouTube videos it's advised to fit better strings; will fitting better strings really make much difference?

I have guitars with strings on them that are 2 years old. It doesn't stop me from playing them. If I was going to record something seriously, I would change the set. For simple practice and private playing, it really doesn't have any effect. It sounds like you are at a point where you're still learning, so the only way I would consider changing would be if a string change made it easier to play. That would primarily be related to string gauge. If you have issues with finger strength, going to a lighter gauge might help.

It also depends on what type of stings you have. Synthetic strings will last longer than gut strings. Playing daily, you should get 6-10 months of use. Metal will last a year or more with daily play. If you find the strings getting dull, it's probably worth changing them. Metal strings are cheap. If you don't like what you're hearing, it might be worth the £5-20 to try something different.

Take some of the things on Youtube videos with a grain of salt. People seem to be obsessed with changing whatever they buy, which instantly makes it "better". Guitar players love to change pickups, tone capacitors and pots. People will change capacitors in mics to instantly improve them. Buy a 30 year old tube and instantly your amp opens up and sounds glorious. High End audiophiles are even worse.
R

Many thanks @TalismanRich for your intersting reply. Yes I'm still very much a novice violin player hence the questions I ask. Possibly I've now got more money than sence but I'm taking violin playing seriously as a new long term hobby. My fingers are OK after all they receive huge amounts of heavy work each year but good point about lighter gauge strings for those with weaker fingers..

I'll never forget my first violin it being a brand new Hidersine Vivente; I was so proud of this; my wonderful wife had bought it as a birthday present for me just over a year ago; I started to practice with it but the more I practiced the worse it became; I ended up only playing the A & E strings the other two strings just didn't want to know then a forum member kindly suggested I take the violin to a luthier which I did; this brand new Hiderine was a disgrace it already needing a set of new strings but even worse the post had been rammed in; the post was well out of position; there were also other things wrong with it too the luthier charged £95 for installing a decent set of strings and setting the violin up; when I returned home I thought I had been given the wrong violin; it now sounded beautiful even to my novice playing; I actually handed over £100 because of the very useful friendly advice and information given to me. I've now got four violins and a Russian Balalaika.

I agree entirely with you about YouTube; I find YouTube gives both good and bad information the bad at times downright dangerous by the way I see American's using a big sawbence with zero regard to safety.

Years ago when I adopted vintage radio restoration I found myself in an alien world of capacitors and resistors etc; at the time I joined my first forum; as the years passed by I'd gathered all kinds of test kit like scopes; sig gens and even a very nice AVO valve tester; a forum member was asking for someone to test his two KT88 valves (Tubes) it's a long story but I ended up collecting and returning him; he brought along a selection of valves in a cardboard box including the pair of KT 88's whilst my wife supplied refreshments I started to test the valves; both KT88's were totally dead as were the rest of the valves; he had me test them twice and given the readings was my valve tester at fault; I had a very good stock of valves so tested a brand new valve of my own it gave a perfect reading; he said I must be wrong because his KT88's looked brand new? 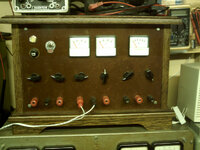 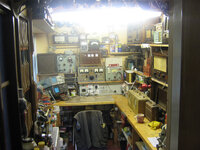 I used to make kit of my own like power supplies as seen in the picture; here's a picture of my old radio shack it's now my recording studio.


About a week later this guy was once again requesting help on the forum to test his KT88's; he must have expected a forum member to give the valves the kiss of life? It cost me half a day plus transport and refreshments. These days I adopt a friend's attitude DIY = DON'T INVOLVE YOURSELF. 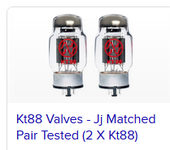 During my radio restoring years I came across music players who insited on matched pair of output valves on their amps; it still goes on with matched valves on EBay.

I wasted a full day because of the hospital phone call where the hospital stated they would call back in 24 hours? I tried phoning Calderdale hospital but now at 75 I don't think I'd have lived long enough to actually speak to someone; I was #12 in the queue so hung up; at 6pm I tried again to phone the hospital this time #5 in the queue so waited and waited and waited finally a guy spoke to me; he checked records and there was no reason for the call so I was just messed around for many hours obviously now a wrong number.

Yesterday and today just brilliant finally some happy violin practice; today I've recorded a short piece and plan to add it to YouTube; I've managed to get the recording loaded to "Audacity" now I need to learn how to transfer it to my YouTube chanel which I've not used for many years.

Success at last; it's been a ballistic learning curve but I've now added a short violin practice on to YouTube; I picked this at random whilst playing around with Audacity and whilst doing this I also came across "Veed" I got badly bogged down converting the Tascam file into a file YouTube recognized spending quite a few hours doing this yesterday.

I can now roughly play half of Lara's Theme song; some days are better than others but every day I manage to spend time playing my violin it gives me more experience at least I can now play a tune rather than simply make lots of unusual noises; once again I can't get into the studio today but I'll keep trying. Not my best effort but used to to see if I could actually post on YouTube.

Had a listen, Colin, and subscribed to your Youtube channel.
Good progress from scratch.

Good job for someone just learning.

I've never heard of VEED. Looks like it's an online editor. I tend to shy away from online editors. Video files are so big that uploading stuff takes too long.

Some years back, I got Cyberlink's Powerdirector but now it's gone to a subscription model, so no upgrades for me. I stick with the old version. Davinci Resolve's free version looks to be a pretty good editor. Its something that I might explore if Powerdirector fails to do what I need.
R

Many thanks @Slouching Raymond I'm pleased to be finally making progress but it's still hard going with endless problems to get studio time; this morning was taken up by a problem with our surgery; a mistake on the prescription which has taken 16 attempts to resolve; tomorrow I'll collect from the pharmacy then hopefully the problem is cleared for the future; it's been taking over my life; I'm not the type who waves hands around like windmill being offensive if something goes wrong; I've been treated well at the surgery for 45 years so just stuck with it; the surgery like most in the UK is under considerable pressure. Problem sorted in a polite manner; the way to go.

Thanks @TalismanRich for your comments; I'm new to editing videos so don't have any experience to fall back on; I do obtain lots of information through YouTube and forums; Audacity was recommended to me a while ago and I've tried to use it a number of times; I did eventually export a violin short practice to my desktop but then it stopped there quite a while whilst I struggled with basic editing of the short session heard in my first video; I was more keen just to get a bit of playing through to YouTube but in future I can be more selective. It's very recently I came across VEED and yes it's an online editor a free one; these sort of things are totally new to me so it takes ages to understand even the basics; I suffered lots of frustration just opening a VEED account but after a while started to get the hang of it hence posted the video. I've not previously heard of Cyberlink's Powerdirector but as it's now subscription I'll not bother looking at it. There are many such free programs to choose from but at the moment I'm finding Audacity & VEEB enough to play around with. Computers absorb huge amounts of time more so whilst learning something new from scratch. Thanks for your kind comment.

I think I'm clear at the moment to wander into the studio but will I make it.