I am about to release my first official music video, and I have asked the editor for a few revisions. In the second version (file "Comp 5"), the debit is lower than on the first version (file "change of seasons revised_2"). The file sizes are also different (683mb VS 818mb).

He tells me that the quality is the same, and he doesn't know why the debit and file size are different.

Please advise, I'm a noob when it comes to video. 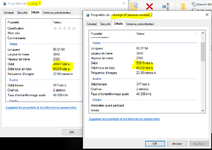 French is a bit tricky but is this data transmission rate? Something to do with the dropped frame maybe, but the two versions appear to be compressed differently, perhaps? Which software is this?
B

It's the "data rate". I don't know what the software was.

The difference in data rate is analogous to different MP3 data rates, 128KB vs 320KB. In this case its 5MB/sec vs 6MB/sec. Depending on the content, it may or may not be visible.
B

TalismanRich said:
The difference in data rate is analogous to different MP3 data rates, 128KB vs 320KB. In this case its 5MB/sec vs 6MB/sec. Depending on the content, it may or may not be visible.
Click to expand...

So that is a setting option you must choose before exporting, right? The footage used in the video was recorded in 4K. The export is supposed to be 4K too.

The compression rate would be a setting in the software. The 4K resolution is there, since it shows 3840x2160 for the pixel count. That's 4K. The frame rate is also the same at 23.98. That means that it's simply a matter of how much compression is being done on each frame.

IF you have ever worked with picture files, you have various formats, such as Bitmap which defines each pixel and records the value, and JPEG, which compresses the file by filtering out some information to reduce the picture size. BMP files are naturally the largest, as it is simply a matter of how many pixels, and how many bits to describe the level. If you look at a JPEG, you probably see the same picture, but some low level details are missing, depending on how much data is lost. Where a BMP file might be 30MB in size, the JPEG may only be 2MB or 4MB in size. It can take a keen eye to distinguish between them.

Now, consider that video is simply multiple pictures stuck together at a set rate. If you use the BMP method, your 30MB picture at 24 frames per second means 720MB of data per second or 43GB per minute, and that is just video, not audio. A Bluray disc would only hold about 1.5 minutes of data are that rate.

To make video files more practical, the codec will do a compression on each frame, to reduce the size, An all black or all white frame could be described in a few kilobytes in a compressed matter. So it depends on how much repetitive data you have in a frame, and how much detail you can lose. By setting the compression rate, you define how much data you are removing. As I said earlier, depending on the picture, you may or may not be able to see the difference.
You must log in or register to reply here.
Share:
Facebook Twitter Reddit Pinterest Tumblr WhatsApp Email Share Link
Top