How Many Guitars do you own

Blame my wife, her idea- she took the picture...and yeah, it is a nice Tele, the bridge pickup just screams.

Blame my wife, her idea- she took the picture...and yeah, it is a nice Tele, the bridge pickup just screams.
Click to expand...

What amp do you normally play though? Post up up some tones.

That's either a very big Tele or a very little guy. Mine looks like a friggin' banjo on me these days.

Bubba po said:
Mine looks like a friggin' banjo on me these days.

You Northerners with your broon ale and Frey Bentos pies....
G

Bubba po said:
That's either a very big Tele or a very little guy. Mine looks like a friggin' banjo on me these days.

When I was a youngster I thought SGs must be big guitars because I'd only ever see Angus playing one. He makes them look huge. But they aren't, he's just a midget.

Im still at about 3....sometimes 4. They constantly change though over the years. Buy, Sell , Trade, pay bills...the Squier Jazz Bass has lasted 20yrs now because its not worth much, plays great (compared to the US Precision frequently at the house) and its a better guitar than I am a bass player.

The acoustics seem to stick around about 5-10yrs....

the Electrics are always coming and going, except again for a Squier51 KidVybes reocmmended I still like it as my beater guitar, its also not worth hardly anything so no bills-due worth ....

the current "nice one" repalced a US strat, to a Roland Fender after trying the Line 6 Variax that came after trying a.....blahblahblah..
the Roland Strat got a new neck right away, Michigan Hard Rock Maple. The tones are fun and it does the regular stuff too. I think it was some deal for $450 usually $1000.

its wierd when I think of my favorite guitar sounds and look up the gear, its usually a SG.
Someday I'll buy one, but I dont care for holding them in the stores. Strat bodys are well done, SG are like a plank of plywood with great sound, but not much going on for beveled edges. Maybe if Id started earlier the Strat-Habit wouldnt have formed.

I could see trading off the Roalnd Strat no problem.... but its got so many tones, its like changing pickups without the hassle.

Whenever I voted in this poll originally I probably had at least 5 or 6. Who knows. Now I have gotten down to 4 and will probably stay around that for a long while. I have two electrics that both get played and two acoustics of which I one gets played 90% of the time. The other is a beater that goes outside from time to time or floats around different rooms of the house.
P

Bubba po said:
That's either a very big Tele or a very little guy. Mine looks like a friggin' banjo on me these days.

JDOD said:
What amp do you normally play though? Post up up some tones.
Click to expand...

I don't use an amp- I have a Digitech effects processor- I run my Telecaster through that right into the four track. All the effect presets that I used I put together myself, effects and amp simulations. As for tones, if you take a look at my Soundcloud page, I lashed together some pretty cool sounds on my newest album, but my "favourite" guitar tones that I've ever used are probably on my song "C.I.A." Really low and growly...

Cool mate. Will take a look on proper reference headphones when I get home.

It's not being easy to sell used guitars lately. I had put a Xaviere Strat (from GuitarFetish) and a ES-175 clone for sale but seems that no one got interested on'em. 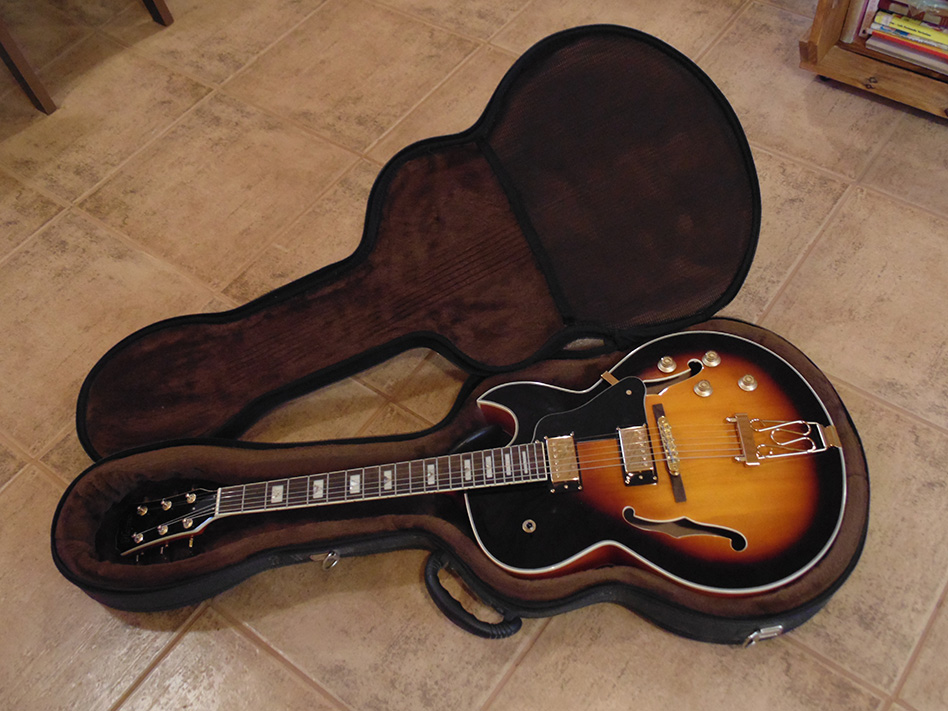 Anyway, I spent a half year trying to find a new home for these girls and since nothing happened I decided to keep them for a while... I am seriously thinking about to buy a good piezo bridge to install on the ES.

The strat is with a luthier friend of mine to replace the bridge pickup by a Lil'Killer and install a push-pull pot for taping. He just called me saying that she is done. Should go pick her next Thursday.

Beside these ones I have a gold top Les Paul that is my favorite. She's not a big brand guitar, just an excellent Chinese clone that I put some money in (replaced pickups, tuners and switch). I don't plan to get rid of this axe ever.

A Xaviere Strat and an ES-175 clone is hard to sell? No kidding. If they were real you'd sell them both in about a minute.
R

Exactly. The good stuff is like money in the bank. Withdraw when you need to.
T

I'm not answering the poll until I have all the guitars I want...or hit the more than 13 mark.

The thread should re-booted.
M

I have 6, love them, and play all of them, they all have a purpose.

and my newest, an Epiphone Riviera Royal P93

Got 6 spread through the house
The cheap Fender acoustic in the livingroom sees the most action - actually very nice sounding and fun to play.
I have a Chet Atkins nylon from a local luthier, a Washburn acoustic and my bass in the studio. But apart from the bass they don't see much use as I make mainly sample and synth based music.
Oldest boy has a cheap strat and an even cheaper classical in his room - when he practices more he can have better instruments.

I'm a sick in the head/gasoholic PRS addict.

Now I need an acoustic...

the cheap off the wall brand guitars will sell quick too....
If the price is right.
The strat clone will sell for 50 bucks.
Ditto on the 175 clone.
You just have to be careful not to pay too much for oddball brand guitars.
Most people do.

I bought a vantage les Paul clone for $200 with hard shell case. I could sell it tomorrow for $200. I put a set of $100 pickups in it and also some extreamly good pots. I also did a complete set up on it.
it's amazing now....
After the pick up upgrade, the pots upgrade, and the awsome set up I can now get....
$200 tomorrow.
lol
That's the price point of a les Paul clone, even if it's an old Japanese made one with the good wood, good electronics, and great pickups.
Last edited: May 27, 2016
You must log in or register to reply here.
Share:
Facebook Twitter Reddit Pinterest Tumblr WhatsApp Email Share Link
Top