$150 dollar VCA compressors. What would you direct a podcaster/performer/voice over/etc. to?

If a beginner home recordist was looking for a rack compressor, what would you recommend? People want maximum serviceability, and the ability to do the tricks. And do it without ruining the input signal (Alesis 3630 im looking at you, WTH).

I placed a hard limit of $150 dollars. Then came up with some common brands that have proliferated the market. Since compressors require no maintenance or service, I advise you to buy used.

ART Pro VLA, Attack specs at 1 ms ...its got tubes. Goes to infinity and beyond! er well infinity at least. Im not sold on ART. XLR TRS( non VCA) 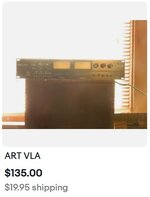 FMR RNC 1773 Attack is .2ms, but its a slower more musical type of the device. It colors the sound in a positive way. It would be perfect for duty on a Keyboard's outputs. Use it on vintage type waveforms. Roland MSV1 JV04 SRX07 or the like, and probably leave it there till you are sick of it. .2 Msec is just enough to get the transients to pop on MAX setting. Low ratios arent great for limiting duty. Hard to beat on vintage applications. ***Star*** this one and put it in yer favorites. Nice Job FMR! TRS insert, unbalanced. stereo. 25:1 max ratio. 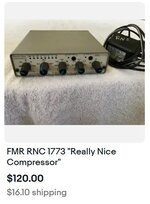 Alesis 3630....It does a speedy .1 MSec attack supposedly. But with a 40 ms release..This thing is garbage. It degrades the input in a nonmusical way. Useless. Destroy! 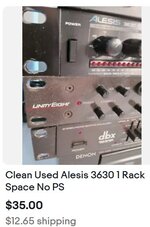 Behringer 2100/2200 ...It says 1 msec attack. infinity. Not exactly respectable specs. It was not exactly transparent, and had a dimming result. Id pass. XLR TRS

DBX 1066 , the 1066 is the best out of the 166-266-X66's. The DBX does not disappoint with specs or features. Great Attack .04 Msec. THATs what Im talkin about baby! Infinity. Expander gate. This is not the rich 160XT with a Jensen output transformer. This 1066 is a cheaper system and there is some loss through it. That kills it. Cause it has the numbers to be a champ. It doesnt sound like anything. The attack and release curves are not designed to add color. XLR TRS 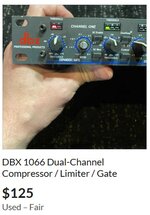 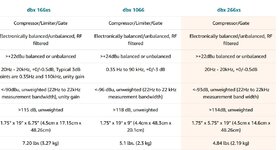 Aphex 661/651 .. Has the specs and numbers of a champion. Aphex kicks out a .05 msec Attack and a .04Sec release..Holy Shit thats fast hardware! TUBES! Transparent! This can do all the compressor tricks. It can redefine the sound with the HFX Aphex exciter circuit. Because after hard compression the first thing you want back are the highs . This EQs them, adding highs back in. Oh, on the inside. Each part has a jumper to defeat the parameter. So the tube, or HFX part is completely removable from the circuit. Has complete input gain and output gain knobs, for saturation tricks. XLR TRS TS link. Mono. 50:1 max ratio 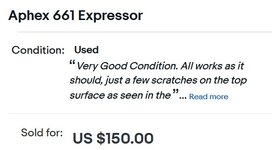 All prices are current.

About the FMR products. I dont like how the FMR RNC or RNLA do not handle +4 balanced. I thought they were TRS +4 , but they are only TRS insertable. So FMR compressors are unbalanced. Shame because the RNLA and RNC are of the greatest sounding compressors. Very impressive sounds.
Last edited: Apr 29, 2022

Symetrix before the covid, supplychain, inflation....had 528E that were amazing for $80 or so. Built like tanks and were $800-$1000 new, mainly large systems it seems. It had the channel strip for a voice and one of the best noisegate/enhancers Ive had, compressors invisible when used in small doses and just a great unit. They went up to $250 and blah balh blah over time, maybe with a recession coming prices will come back down.

the RNC is great and easy and small. Had the Aphex too its a fav sound for me but I have had a few units just "old age" noises or dead channels...1990 was a long long long time ago. Aphex were amazing for $59 and that range, kind of like Symetrix in my mind...awesome deals sub $100. Maybe even ok to $200 but then theres Brand New stuff like RNC that even pro's say are great performing pieces.

I wouldn't get too hung up on specs.

The ART works well on a lot of things, including vocals. I've used it successfully on bass and pedal steel. It might not work on some things, but I've found it useful.

The RNC is pretty nice, but I've found it to be "puffy" sounding. Again, that will work on some things an not others.

I've had bad luck with the older Behringer compressors. They sounded grungy even in bypass.

I haven't used the 1066 much, but I'd really only resort to that if I was seriously short on space. I'd much rather have any of the 166 models. I use an original Project 1 266, and I can make it work on most things. It's not spectacular, but it's passable.

I have not used any of the Aphex compressors enough to comment.

I just did a quick search on Ebay and boy it seems that prices are up by quite a bit. Was going to suggest you stretch a bit to something like a Drawmer MX30 but those like most are way past your budget. Decent compressor and pretty transparent brick wall limiter. I've used a couple as a safety to keep from clipping over the years and they work well. Seems like a bad time for new and used.

CoolCat said:
Had the Aphex too its a fav sound for me but I have had a few units just "old age" noises or dead channels...1990 was a long long long time ago. Aphex were amazing for $59 and that range, kind of like Symetrix
Click to expand...

bouldersoundguy said:
I have not used any of the Aphex compressors enough to comment.
Click to expand...

For what they cost , Aphex is a great deal. Their AGC is top drawer. The compellor is part of that set. The whole thing works together and is impressive. I copied WHBC's station channel..yeah like 1992-93? They rented eveything. I had to replace or upgrade some pieces , but quality and worth are good words for them. It can color the microphone input or be transparent.
Pic of my channel strip. 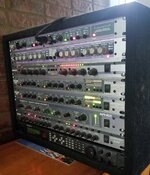 I own or owned the ones I listed. Im not just shitting on em. 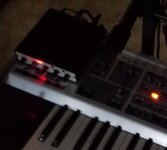 My first compressor was the Drawmer LX20. It is still in my rack - unlike a few others that I've tried in the intervening years. It is a soft knee compressor with a fixed ratio but they've chosen the characteristics well so that it works on a wide variety of sources. It looks like there are some advertised that are within your budget.

RFR said:
I have an Aphex Compellor. Came from a tv station. Good enough for leveling out on air broadcasts, good enough for me
Click to expand...

Its an AGC. A pre-compressor, compressor.


jamesperrett said:
My first compressor was the Drawmer LX20. It is still in my rack - unlike a few others that I've tried in the intervening years. It is a soft knee compressor with a fixed ratio but they've chosen the characteristics well so that it works on a wide variety of sources. .
Click to expand...

Interesting, I know nothing about it..Balanced/unbalanced? 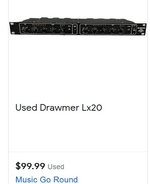 I see its got independent attack and release. Knobs say .1Msec atk and .1 Sec release. The release is nice and tight, so you can narrow the dynamics. Then you got a output that does reduction, so you can push against it with a preamp. Get some satch..(saturation).

My vote is on the ART. Seriously good stuff for the price. I’m wondering why you would need a super fast compressor for vocal work?

ART is no joke. It’s only tangentially related, but their MPA II beat out Neves, SSLs, APIs in a blind test. It consistently performed well to the listeners.

When we compared eight mic preamps with very different designs and price tags, we found it hard to tell them apart. Could SOS readers do better?

The Art VLA has a set Attack and Release. It is fixed. The fast setting is 1 or 2 Msec. It does go to infinity on a Knob for ratio. You want to make it fast to catch pops and transients, then use the release to narrow it dynamically. Isolating the part of the sound you want and magnifying it in the mix is what compression is about..You need complete sweepable controls.

The VLA II is an Opto Vactrol..the VLA II has a photocel, albeit you get control knobs for attack and release. No infinity in the VLAII.

Higher the ratio the harder the brick.

The LX20 is unbalanced. It was designed to work with the unbalanced insert points that are normally used on budget (and not so budget) mixing desks. It seems to use a sensible grounding scheme and has never given me any problems with noise or ground loops.
R

LazerBeakShiek said:
Its an AGC. A pre-compressor, compressor.
Click to expand...

So what’s that mean? AGC

I do notice the compellor is very subtle and clean. Zero color

If I've got a selection of compressors, I don't need every single one to do everything. The Pro VLA (original) does a lot of things really well, which is good enough for me. Not having fully variable attack and release has never been a problem.

RFR said:
So what’s that mean? AGC
Click to expand...


I have an older US made DBX 166 that I’m pretty pleased with.
Not sure of current pricing on those, or if people even find them desirable.

bouldersoundguy said:
If I've got a selection of compressors, I don't need every single one to do everything
Click to expand...

The people who don't, probably want the most options for their investment.

An Easyrider wont cut it.

I do notice the compellor is very subtle and clean. Zero color
Click to expand...

Put it in front of your compressor. You'll hear it.

LazerBeakShiek said:
The people who don't, probably want the most options for their investment.

Yes, if you've got only one or two, you need them to cover all bases. But if you're mixing anything bigger than a duo, you'll probably want more than four channels of compression, so it starts making sense to trade doing everything for some variety.
You must log in or register to reply here.
Share:
Facebook Twitter Reddit Pinterest Tumblr WhatsApp Email Share Link
Top