Well, as is the usual form, this "Story..." thread has its origin embedded in another thread since I still haven't figured out that every time another piece of gear follows me home, and I do a little blurb on it, it ends up endearing itself to me and there's more to the story than a blurb.

This "Story..." is a little different because I swear I wrote this up already, and some other forum members recall it too...unless they really just don't know what to do about my apparent dementia...but I can't find the thread anywhere, so you all get to enjoy this one.

So, anyway, the origins of this "Story..." starts here:

Shortly after picking up the 238 locally for $150 with a functional ATS-500 and associated cabling, I dove in to repair the capstan servo board. You see this 238 was going for relatively cheap because it had the dreaded "jet-engine" runaway capstan. This problem has been fairly well documented on the internet, and it seems the typical solution is a replacement of the electrolytic capacitors on the servo board (which is an integrated assembly to the capstan motor itself). The original caps are little surface mount parts. I hate surface-mount parts. There are also two film caps, but I figured those little

surface-mount electrolytic caps had to be the problem...and this is partly because I already had the replacement parts on-hand which = really cheap fix, oh boy, fully-functional 238 for $150 including an antiquated piece of MMC hardware I'll never use.

Before I dive in to the "238 exposed" pictures I will say overall I was pleased when I met the seller to pick up the 238...all there including the sometimes missing or never mounted rack ears, a couple scuffs and scratches, but overall clean and complete, for example: 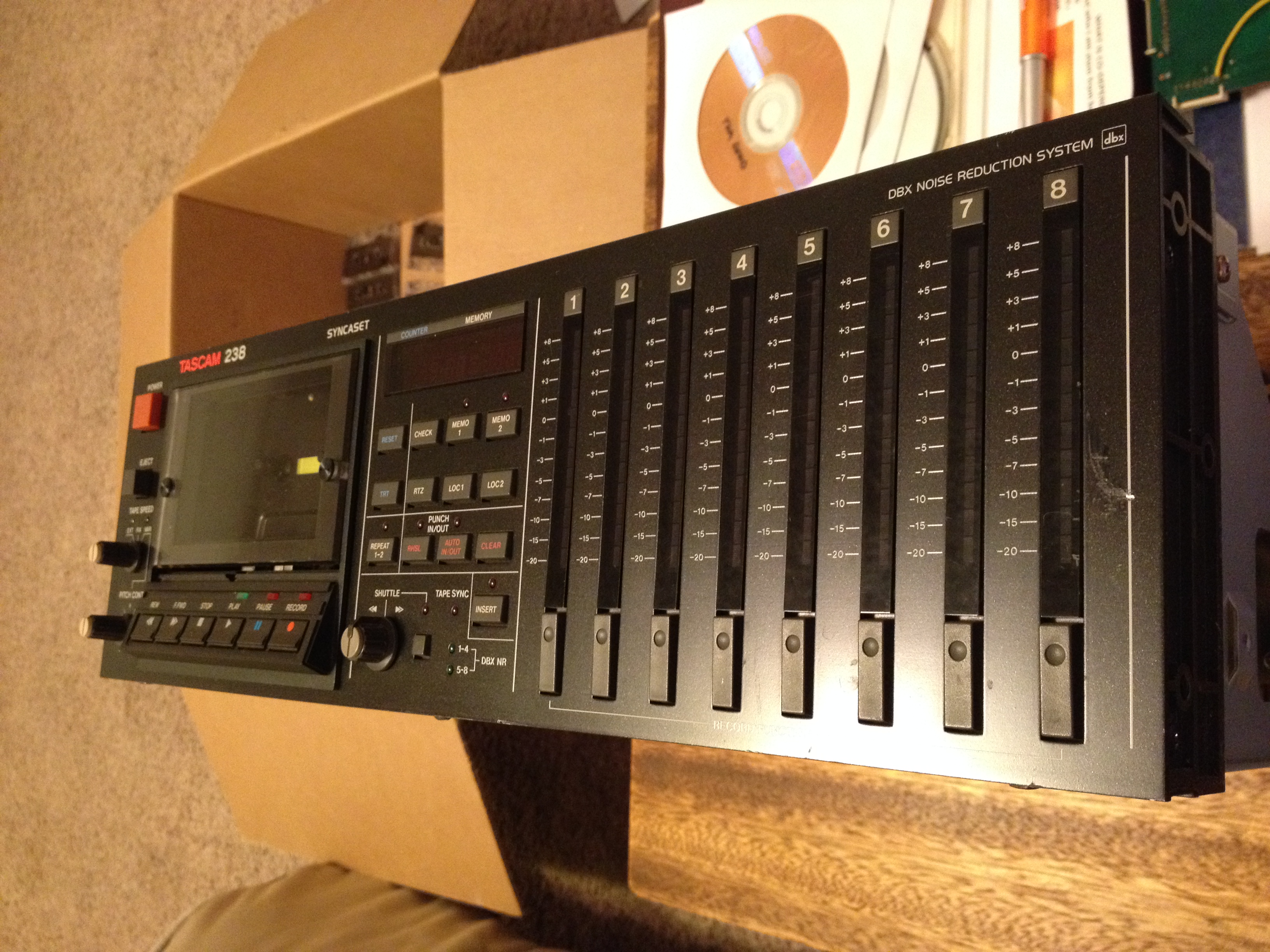 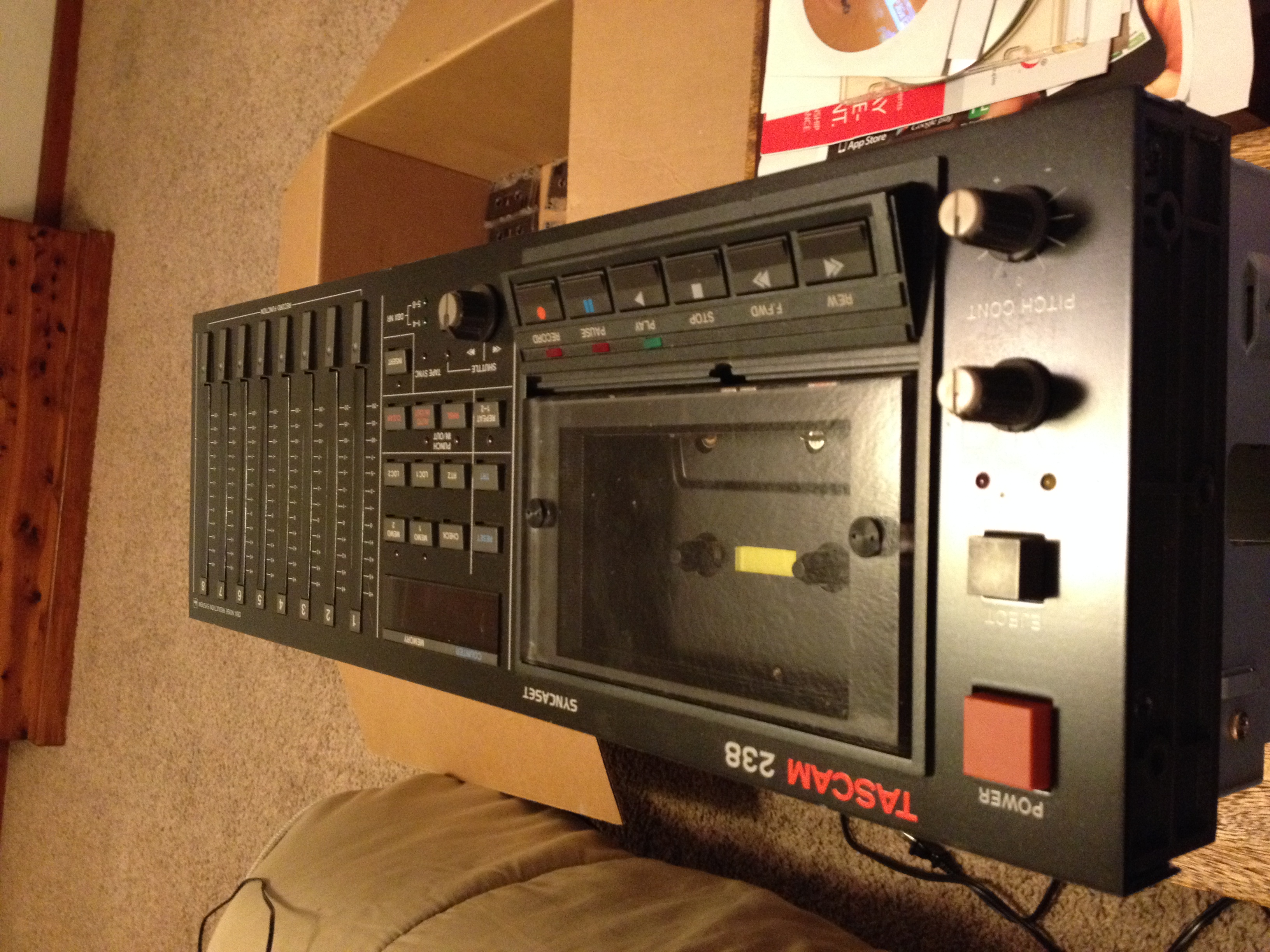 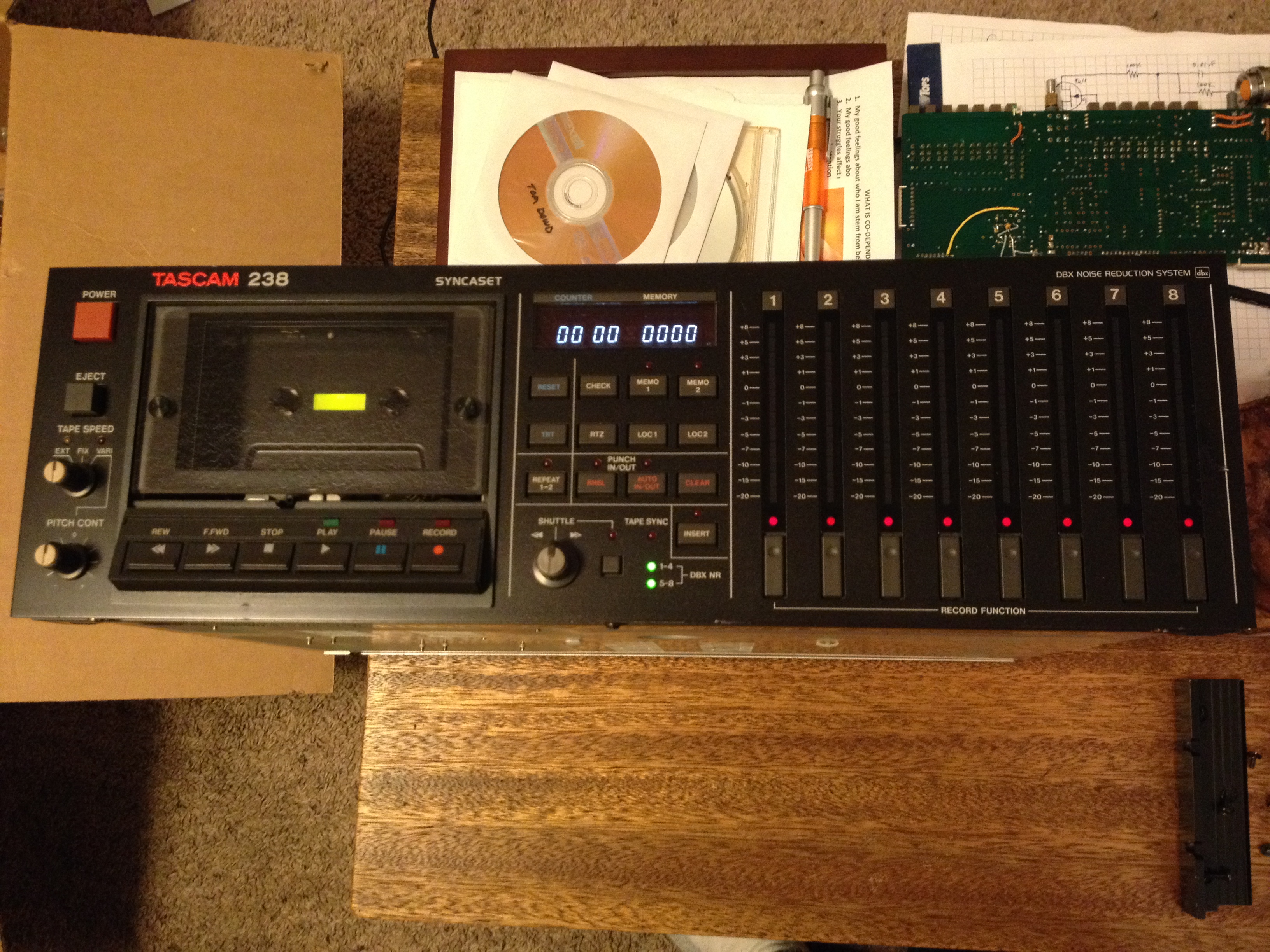 Having owned and done quite a bit of work on a 234, I was really surprised/impressed at how clean the interior of the chassis is on a 238...I mean, its really got a lot of room to work compared to the 4-track 234, and I love how the amp cards are plug-in on the 238, one card per channel with the input, output, record, and playback amps as well as the noise reduction all on the single card. 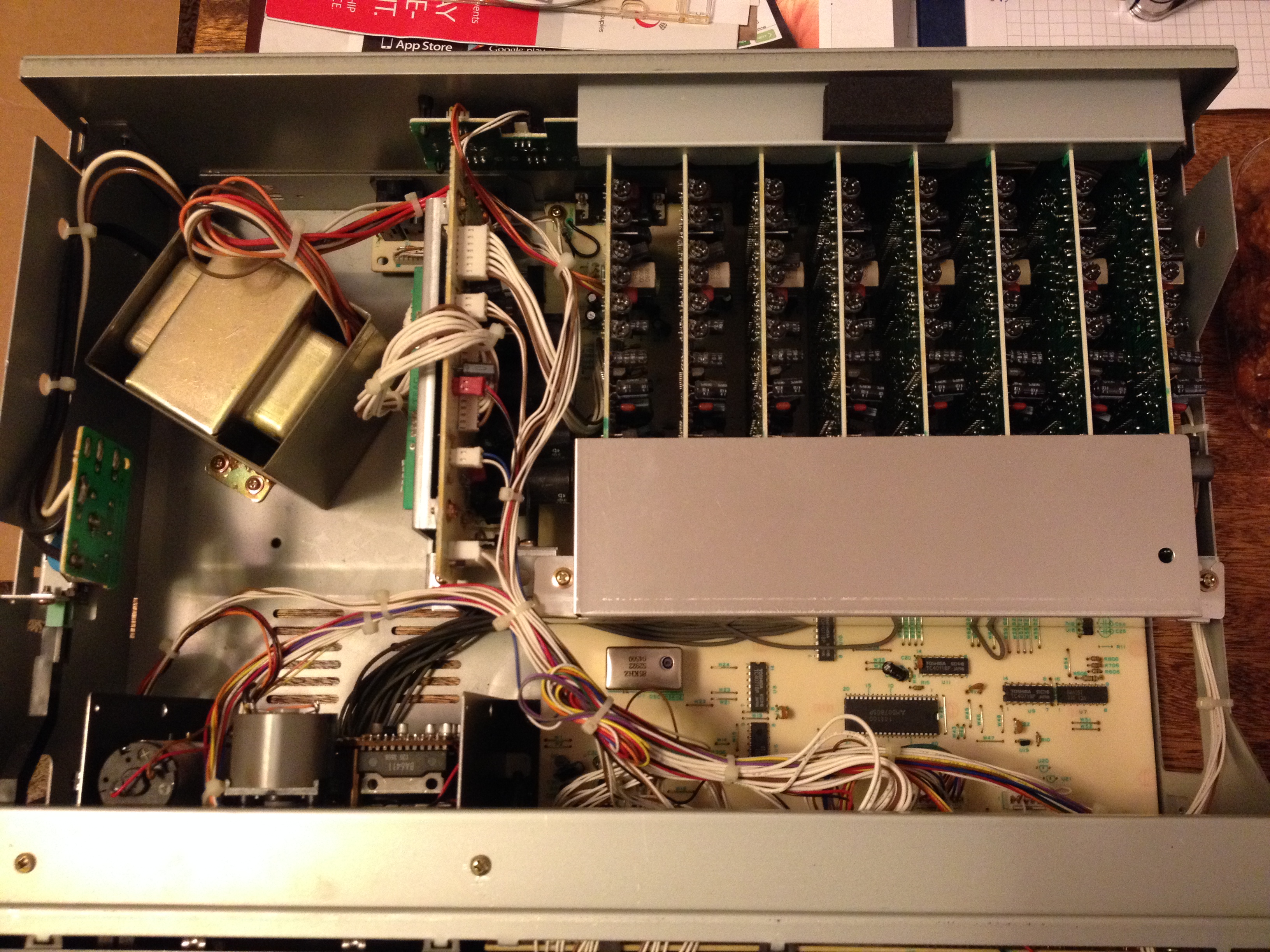 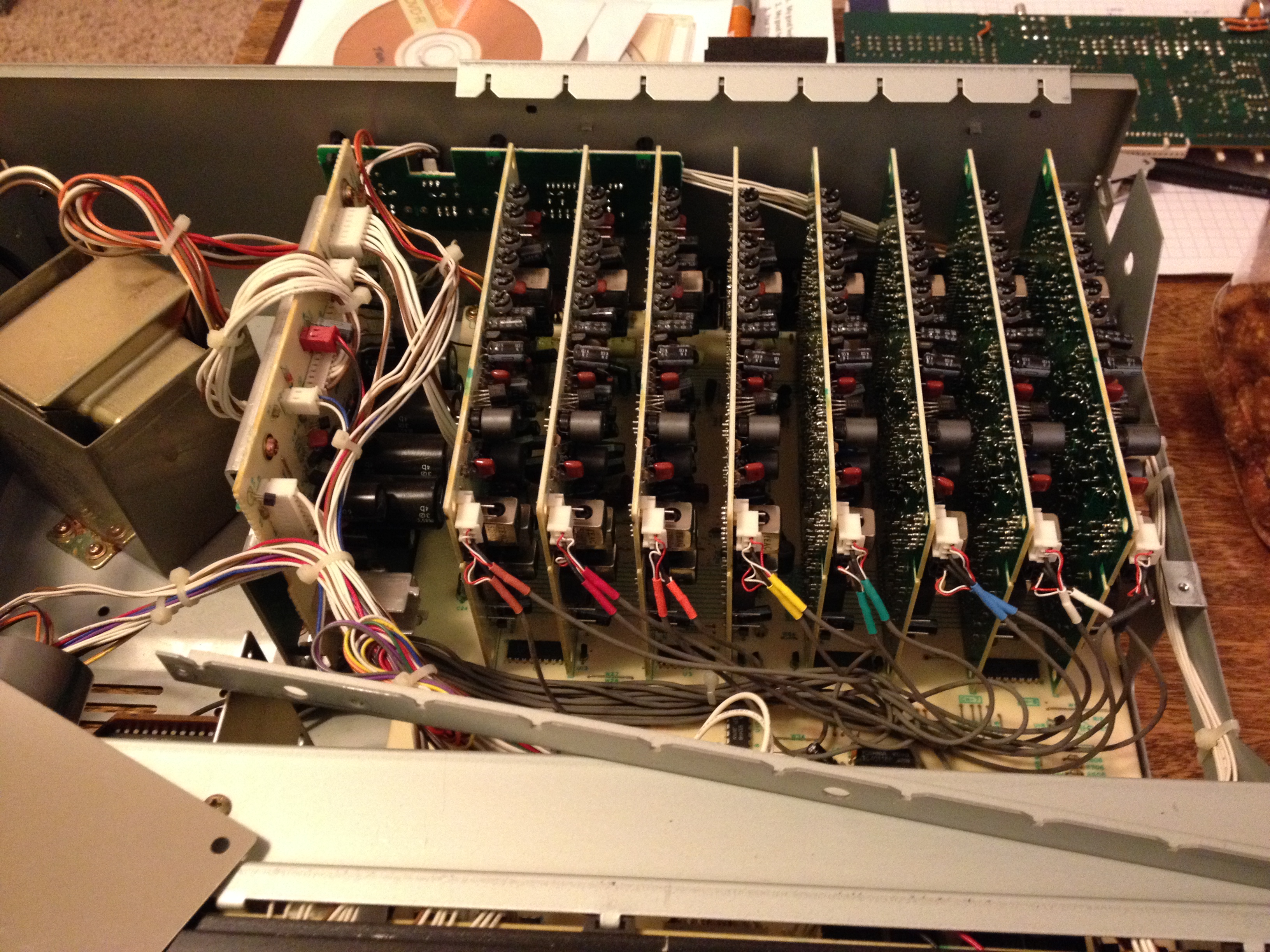 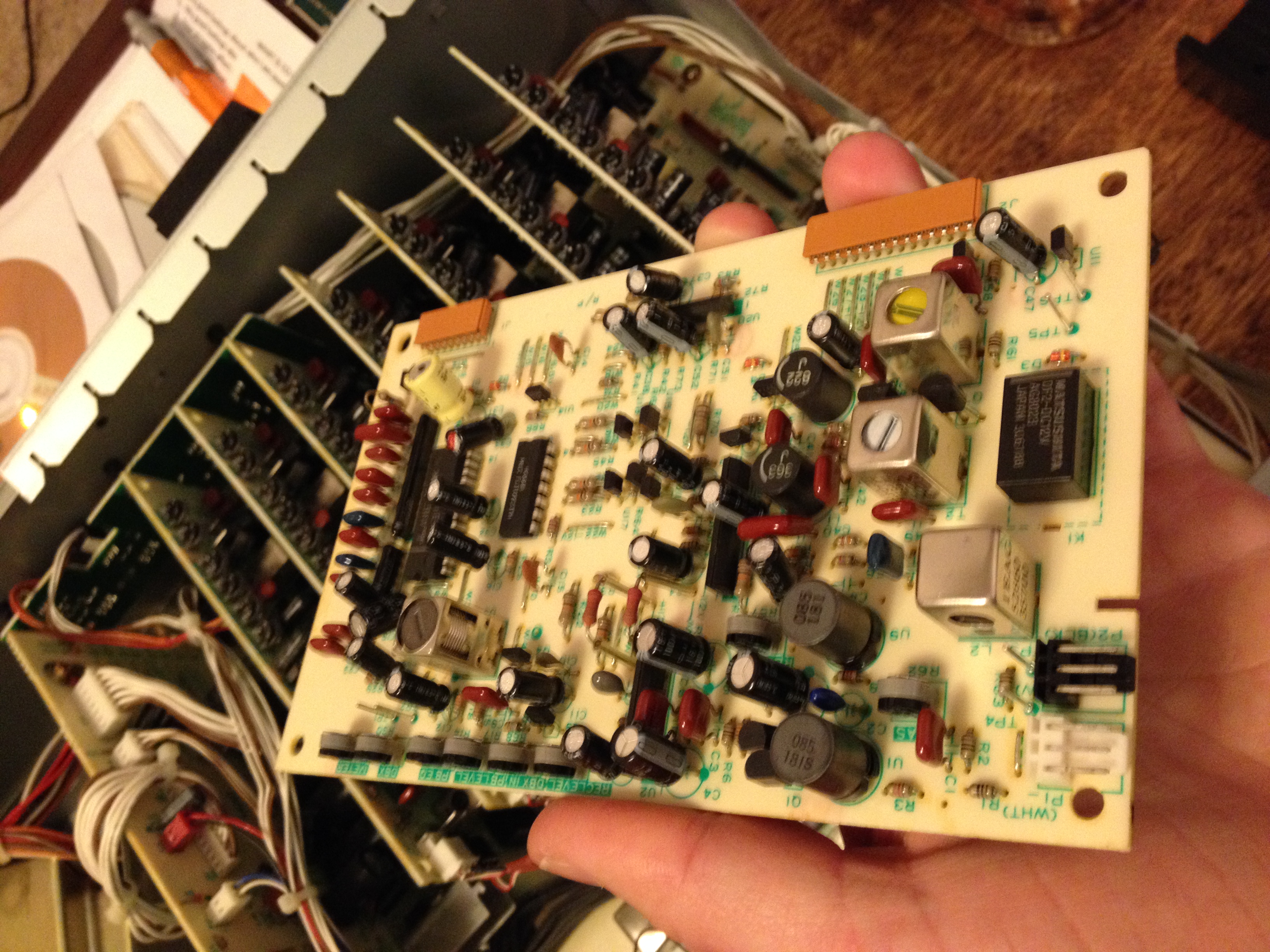 And my goodness...literally, after removing a structural cross-member, remove two screws, remove the cassette bay door, and the entire transport assembly is ready to unplug (a few connectors) and remove: 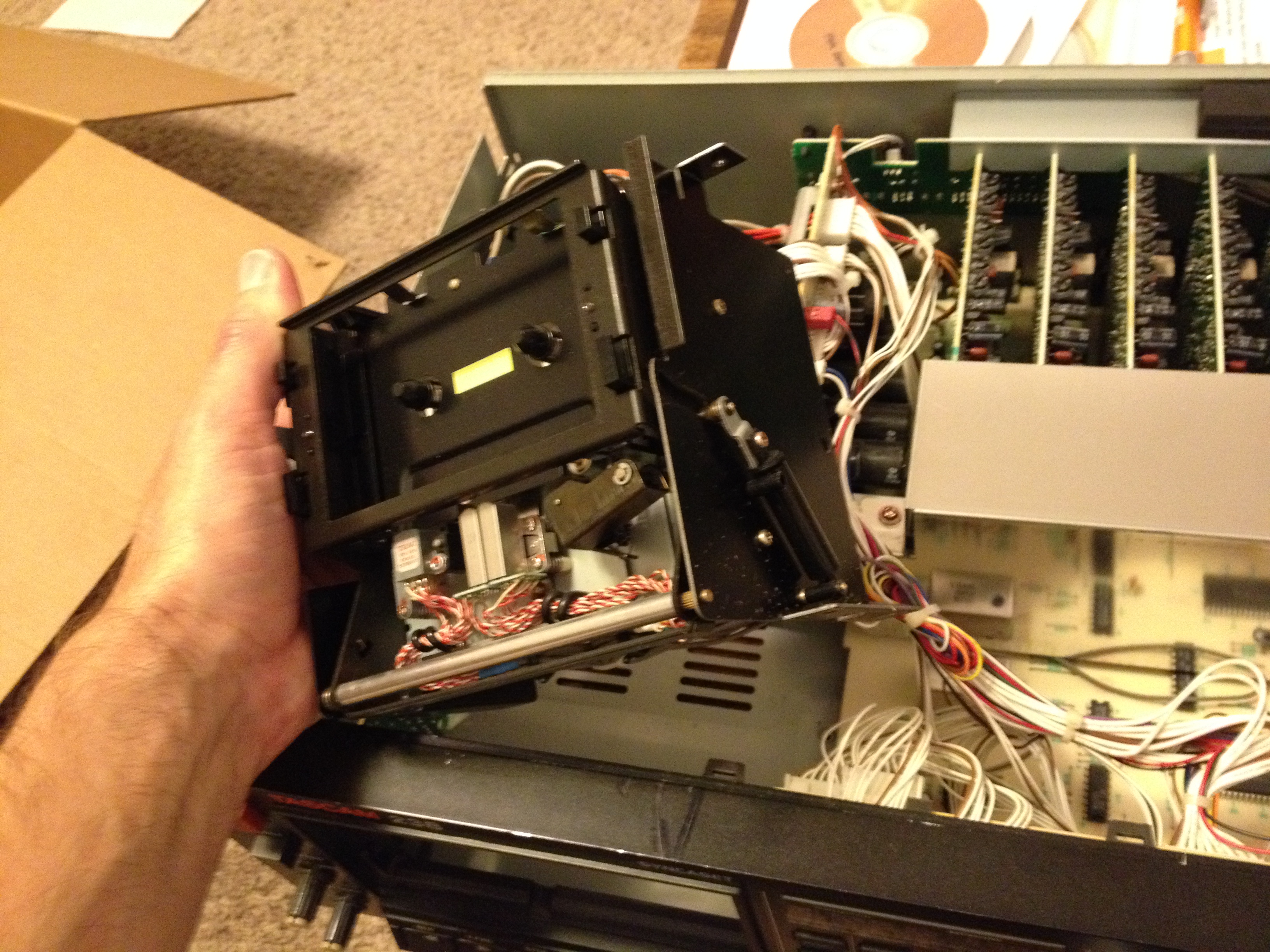 Remove some screws and the board comes off the motor assembly: 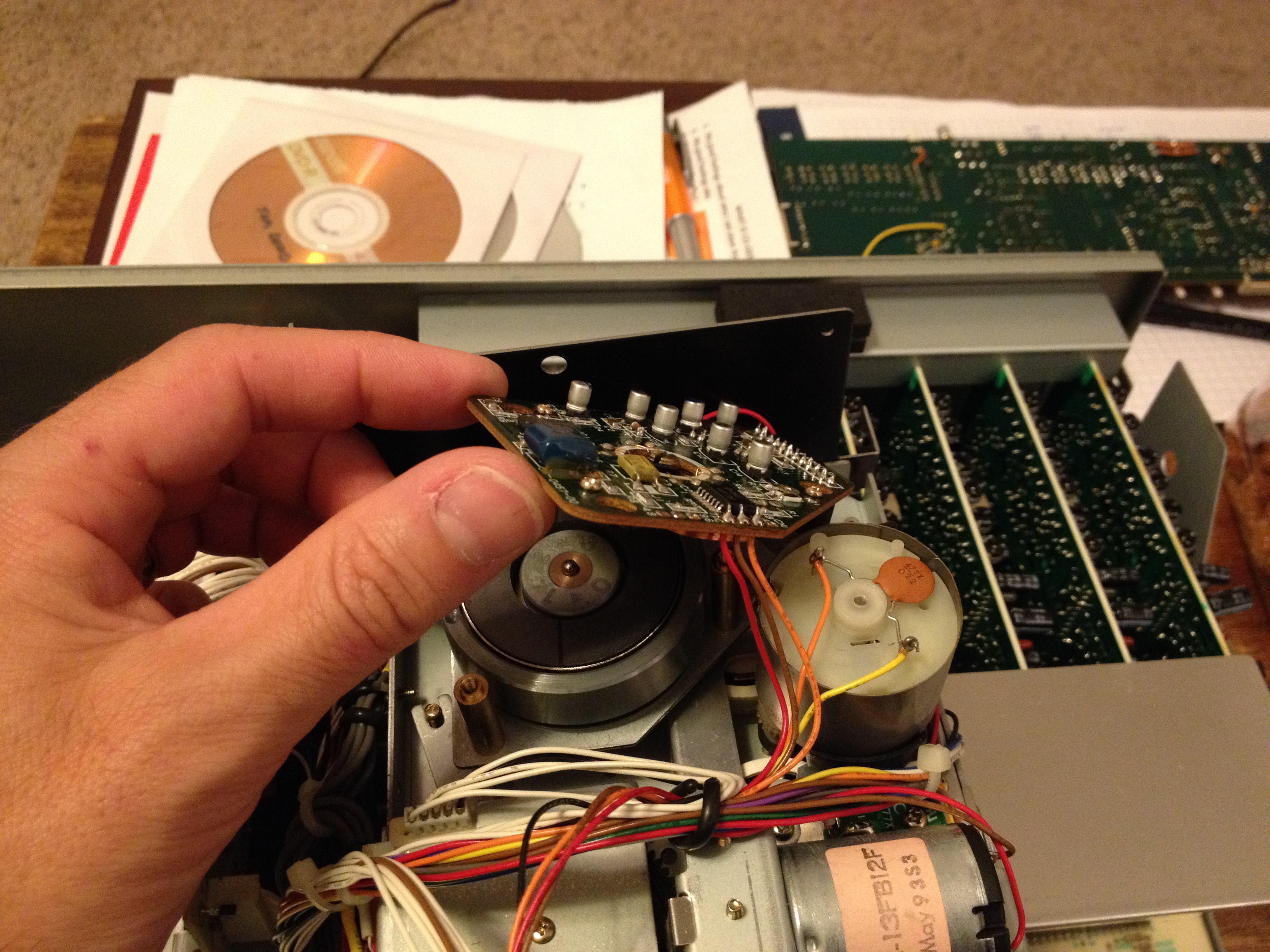 Then if you're really curious you can slide the capstan shaft with flywheel out of its bushing. Not surprisingly the construction ideology of this part of the guts is similar to the 388 (since, if I'm not mistaken, the two were somewhat contemporary to each other, the 388 being introduced first). I was careful. Its a capstan for a compact cassette machine. Its small. I didn't really want to tweak it: 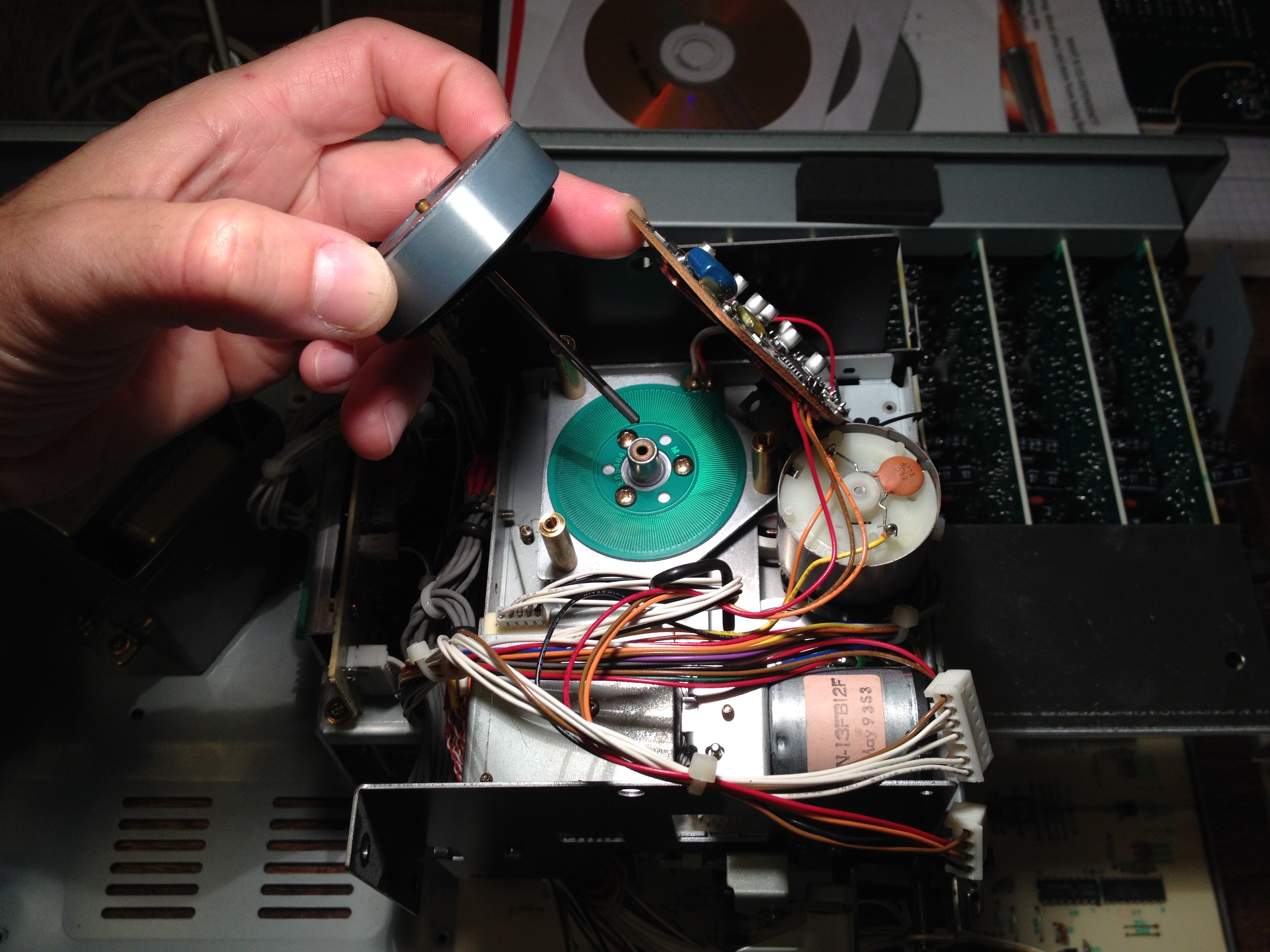 Then I really wanted to see the coils and stuff so I kept pulling stuff apart...pretty neat: 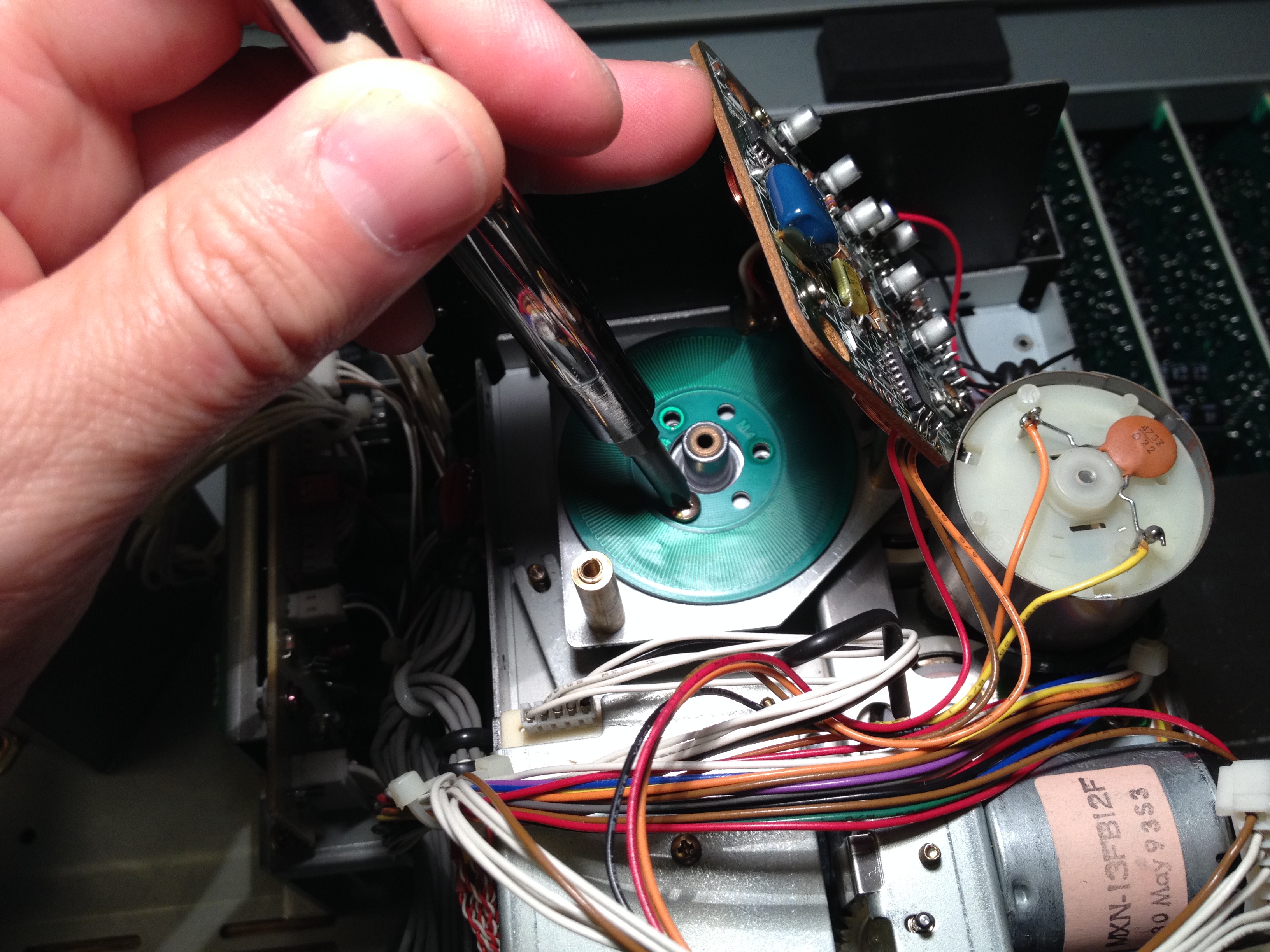 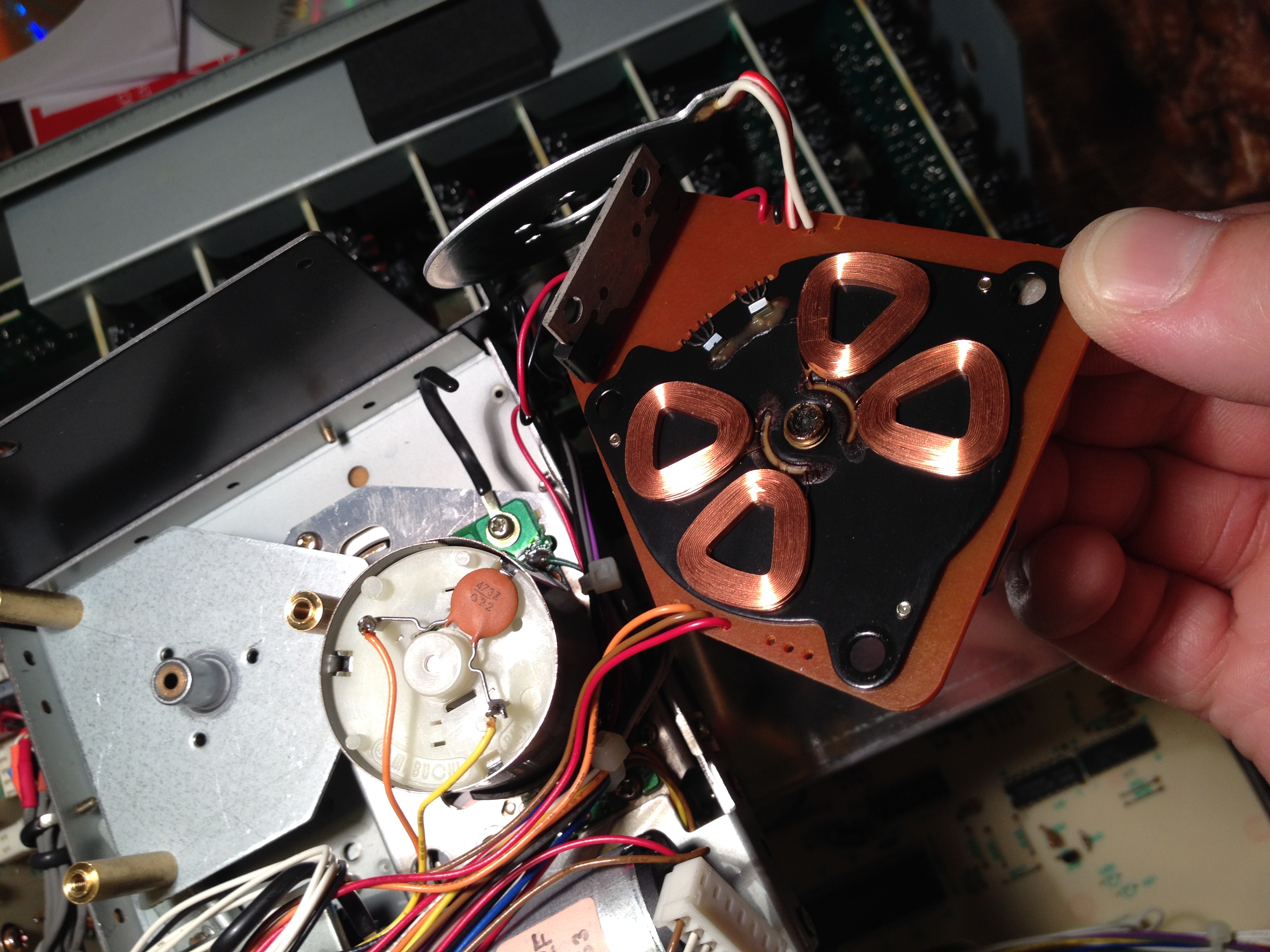 Okay...so anyway, enough with the distractions I thought...you little 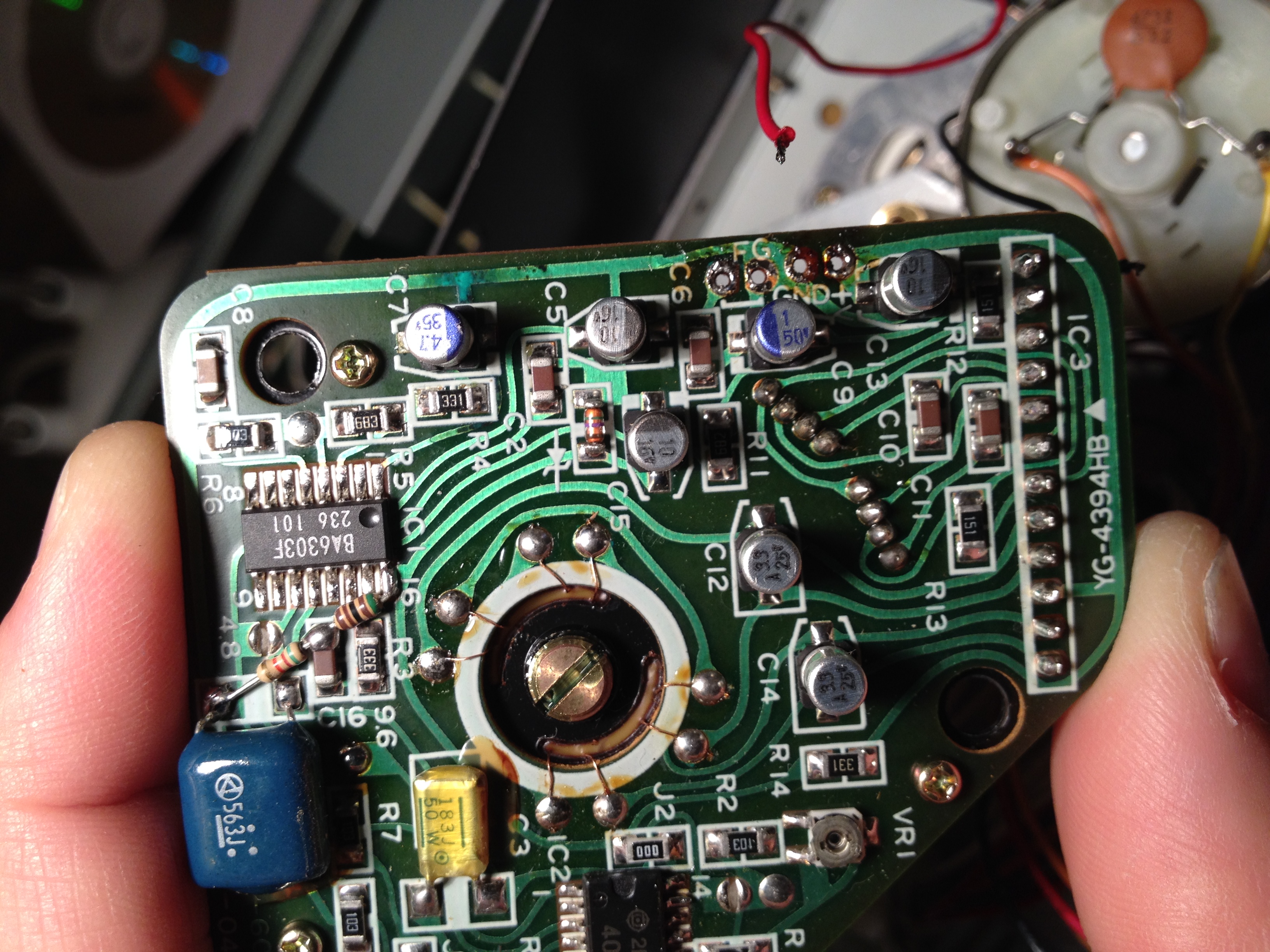 You know, I don't really remember how long it took me to do the recap...most of them went fine once I got the hang of it, but a couple of them, well...the traces leading from the solder lands acted like a quick-blow fuse you'd see in a Looney Tunes cartoon, so I had to jumper those and whatnot...but at the end of it I was pretty proud...not of my work...it was ugly...but I survived, and I learned something: I 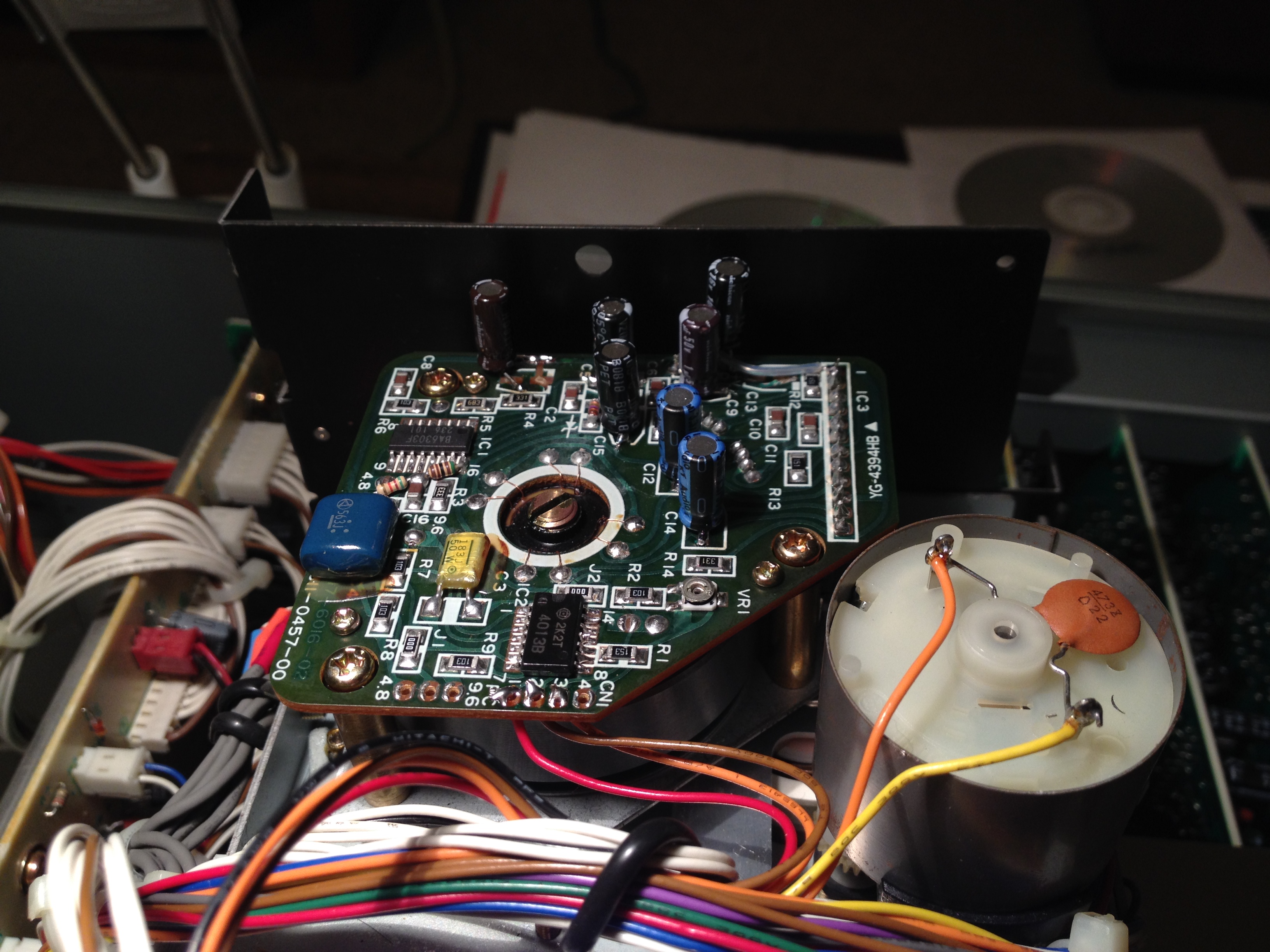 Wait...[he mutters upon powering the now offending device]...why does it still sound like a jet engine?

Next day I ordered a new capstan motor assembly direct from Teac in Montebello, CA. It was, I think, $107. Brand-new, arrived in less than a week...well worth the price of not having to touch my iron to the Looney Tunes PCB again.

That was many moons ago...haven't found the time to put the new motor in or anything. The 238 was in a box out in the shop, now its *somewhere* in storage. Someday it will come out and I'll update this thread, though I did recently pick up an accessory for the 238...

Lovely machine. I still want one!

Well dang...I always enjoy it when *somebody* bites at the teaser (like I put at the end of the first post)...well, anyway, I picked up an RC-88 remote for the 238 recently. Yes...I paid as much as I paid for the 238, but they are rare, and this one came with all the original packaging and literally is in new condition. Listing said it was unused. I don't usually believe such claims, but it might be accurate in this case.

A picture pulled from the listing:

The cord rap state would indicate use as its not tightly and neatly folded...based on the partial picture.

Just putting up a pic of the new capstan motor assembly and a better pic of the remote...yes it is used, but stupid-nice condition for used!

I have two of these machines. And the best of the two came down with capstan disease. I read a few years ago about tyhe fix, just haven't got off my ass to try it.

That looks like a fun machine. I didn't even realize it was possible to get 8 independent tracks out of a standard cassette.

I got the new replacement capstan assembly installed and even took it for a spin (no pun intended). The 238 records and reproduces on all tracks, but it needs an alignment for sure, and the record level on track 8 is really low. I haven't cleaned the heads yet so that's a possible contributor...and playback of 1kHz tone reveals a rhythmic warbley sound and I'm thinking possibly pinch roller deformity...not sure yet, but it'll have to be resolved before doing any meaningful work. What was I expecting...it would all work perfectly?

But it really is a relatively clean machine cosmetically, and the transport functions are really strong and positive...the RC-88 remote works like a charm and I'm getting audio in and out, so that's a pretty good start.

I had a lot of fun and did some pretty cool stuff with mine.

After cleaning the heads, demagging the tape path, getting the pinch roller out of the machine and giving it a good cleaning, this thing is recording and playing back nicely on all 8 tracks, levels are pretty flat. And it sounds good. Was using Jeff Buckley's "Everybody Here Wants You" as a test track. Let the haters hate...I think it's pretty amazing how good these tiny little tracks can sound.

This 238 is 100% operational and functional, nice to look at, has the RC-88 remote to go with it, and has a brand new complete capstan motor and servo assembly...not a refurb but brand new direct from Teac.

Awesome SB!!!! These "stories" are kinda what got me into this little hobby. Congrats!!!

Bumping up this old tread

I brought my own Tascam 238 to the technician. he replaced the caps mentioned as problematic..but just as it happened to you [MENTION=79692]sweetbeats[/MENTION], the tape still performs defectively.
I have contacted Teac of america regarding the capstan motor assembly, but they said that there's no spare parts of any kind for the 238..hmm

Did anyone around had any success with it?

[MENTION=79692]sweetbeats[/MENTION], it is my understanding that you have ordered and replaced the motor itself and not the pcb, did you stick with the orginal pcb that you haved moded with new caps?

My main concern is to spend 150$ on the pcb, while the defect might come actually from the motor itself.

Any idea how to figure out wether my 238 got a bad motor or just a wracked pcb?

It’s a problem with the servo system itself, not the motor...if you’re having the runaway capstan “jet engine” issue. I installed the complete replacement motor and servo PCB assembly, but I’m confident the motor wasn’t the issue. If your motor runs, it works. The servo makes it run at the right speed.

This is a great thread Cory. Well done.
I'm just re-reading it as I've ordered a few boards from the US to try to sort out the one machine that is playing back too quickly. I removed the covers again today to compare the two machines I have. The one I received that has had a new board, has this board: 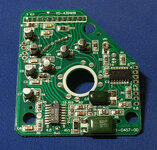 As you can see, there are no resistors between IC1 and R15 like there are on your machine. My other machine with the faulty playback, has resistors similar to yours, so either these cam from Tascam like this back in 1991, or they were recalled as a fix to some problem that occurred or maybe this was how technicians repaired machines that were running funny perhaps? Looking more carefully at your pics, how do the four coils of copper on the reverse of this board control the speed (if that's what they do?) I will have to be extremely careful I think removing these from the old board. I notice on my repaired machine, the tech has run solder over every wire here to possibly beef up the connectivity?

altruistica said:
Looking more carefully at your pics, how do the four coils of copper on the reverse of this board control the speed (if that's what they do?) I will have to be extremely careful I think removing these from the old board. I notice on my repaired machine, the tech has run solder over every wire here to possibly beef up the connectivity?
Click to expand...