Silly little thing to share, but not many people would understand...so here it is:

I’m too cheap or fiscally challenged (probably both) to buy one of those fancy electric desoldering tools. So all these years I’ve been using one of those $4 spring-loaded desoldering tools...like for nearly 3 decades I’ve been using the same tool I got at Radio Shack when I *first* started doing anything with electronics and soldering...building custom subwoofer boxes with my brother for our cars...anyway...serious...I’ve been using the same solder-sucker tool since high school back in the 80s...I don’t know *how* many solder joints I’ve cleared with that thing, but with all the repairs on dozens of devices and thousands of caps and who knows how many ICs I’ve pulled...anyway...thousands and thousands of click...*pop!*...the plastic tip is so deformed. I’ve trimmed it with a hobby knife and smushed it back into some shape with pliers several times...I’ve looked at replacing it a number of times in recent years or at least trying to find a new tip for it. I know...some of you are going to read this and be like “‘Beats, WTH...! Just get a real tool!” I’m weird this way...like see just how much I can get out of something. I dunno...a lot of stuff I’m totally like “must...have...the...proper...tool...!”, but other things? Like my desoldering tool? It’s like “Nah...it works...I’m familiar with it...I’m good.”

Well, I finally pulled the trigger and bought a new tool. Still a spring-loaded manual type tool...I splurged a little...cost me $20...geeeez what a dummy. I should have done this a long time ago...WAY more suction, easier plunger actuation, soft silicon rubber tip so it doesn’t hop on the work when you release the plunger and it even comes with a length of tube so you can renew the tip like...I don’t know...maybe 8 times? And it’s even more portable than what I’ve been using all these years...all metal, no plastic...It does such a nice job of pulling the solder off the joint. So I’m really excited, like I’m not dreading pending desoldering work now. But...how silly to feel kind of bad for reaching this point of getting rid of this old cheap worn out tool...an old friend of sorts.

I can’t keep everything...I’ll never use it again...but it feels sort of wrong to throw it away. We’ve done a lot of work together...even used it to repair my brother’s MicroMoog that never worked right when he got it used in...1977 I think it was...we made music on it anyway, but here a couple three years ago I had gained enough knowledge I was like “Hey what’s the deal with the Moog again? What is it that doesn’t work?” I knew enough about electronics to be able to troubleshoot and diagnose a failed transistor and find a suitable replacement part and, for the first time since he bought it, we were able to make the sample-and-hold circuit work (that was the specific feature he bought it for...and it didn’t work)...we did it together and I just really love my brother and all those memories tied up in that MicroMoog...all those *years*, and this little POS desoldering tool was used in that process...there are not enough moments in life where you really yell out a real “yahoo!” and connect a solid high-five due to true triumph, but we sure did when we powered the Moog up and that feature actually worked...anyway...memories...and old friends. My toolbox is only so big...and I’ve got the memories and a picture. The dog is clearly very concerned about all of this hahah...here’s the new tool next to the old friend...on to the next several decades of repairs and projects...thanks for letting me share...

I know just where you are coming from Beats!
However, IMHO those old 'smash n grab' suckers were inventions of the devil! I will admit much of the print I worked on was cheap, consumer ***t (TV, VCR) but those suckers destroyed it! I have long since given them up for de-soldering braid, almost mandatory for SMT kit (but you don't want to go there!)

I am intrigued by the new device however? Would get one but my eyes will probably FU before I run out of braid!

When we decided to travel and we were selling the contents of the house I ended up having to decide between my (relatively new) digital multimeter, or the first one I ever bought...... 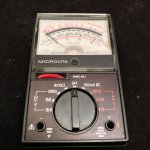 I actually think I kept it and hid it somewhere, but I can't find it..... so I either gave it to one of the boys, or it was sold when we sold the trailer, or I'm going to get a surprise someday that will bring a smile to my face.......


.....on a sidenote....... has anyone ever thought of attaching a low powered vacuum to one of those solder suckers? I think I could be more accurate, then when the "jolt" comes.......

I've got a couple of the manual solder-suckers...and I use them quite often when I'm doing one basic repair or doing some basic change on something....when it's a simple one-off job. I even bought an extra tip for one of them right off the bat...just to have in case.

That said...a year and a half ago, when I re-chipped, overhauled and re-capped my entire 28 + 12/24 channel Trident console...I would have committed suicide while trying to remove all those caps with a manual solder-sucker. I think there were over 1200 caps total!

The $250 I spent on the Hakko FR-300 desoldering gun was worth EVERY PENNY.
Man, that gun made that job enjoyable. It was super fast and very clean, and because of that fast action, the time spent heating the old solder joints before sucking up the solder prevented any damage to the thin PCB traces.
There was only one solder joint where I managed to slightly pull up the trace, and it was my fault, because I was distracted, and held the gun there a few seconds longer while still applying heat, even after the solder was sucked up...but that was it, for the couple of thousand + solder joints I had to remove.
HIGHLY recommended if you have a lot of desoldering to do...and you want to just get it done, without hassles.

I toyed with the idea of reselling it now that the big job was done, and I could easily get $150-$200 for it, because they normally retail for around $300 (I got a deal when I bought mine)...but I decided that when you have a good tool, you keep it, even if you may only need it a couple of more times at some point.
It just makes the work easier when you have a lot of it to do.

miroslav said:
The $250 I spent on the Hakko FR-300 desoldering gun was worth EVERY PENNY.
Click to expand...

Seconded. I have one of the cheap Chinese copies, a rebranded Aoyue 8800, I think. It is an absolute godsend, especially for desoldering chips.
E

When I started at work on guitar amps I had the task of replacing shedloads of chunky 6 pin switches from double sided print. Braid worked but was tediously longwinded. I made up a tool. 15mm brass cube with 6 1.2mm D holes in one side using a scrap PCB as a template. They were about 2mm deep.

On the opposite side was a ~5mm blind hole that took a #9 Weller bit (I had quite a bit of stuff from the Bstds I worked for before!) secured by an M3 grub screw. You flood the holes with solder and press it against the switch contacts. Take a bit of learning but there is a point where the old switch comes out clean and without damaging print . Touch up with braid, job's a good'un. You could make such a tool for any PCB component. A drill press is VERY handy!

A trick for ICs and similar components is to cut each leg first then clean up with your fave method. For ICs I ALWAYS fit a low profile holder.