Humidipak Leaked Inside My Guitar (Suggestions)

Long story short, I had my 12-String Seagull guitar in my storage place and I left a D'Addario Humidipak system in the guitar. When I pulled it out after a couple of years, the packs leaked into the body of the guitar. The case was at an angle so all the goo leaked the bottom right corner and I cannot get my forearm and hand to reach the area.

I have no idea how long ago this happened. The outside of the guitar shows a stain which is how I realized it had happened. The wood feels strong, but it's definitely different. I don't think there's anything to be done about that.

I used a pencil to scrape a bit so I could at least figure-out what the consistency is and unfortunately it's like crystalized honey. It's not dry and I suspect it's not going anywhere and will fluctuate with the humidity of the environment.

Anyone have any suggestion on getting it out? I'm a bit slow so I want to make sure I'm not missing a good idea because once I dislodge the stuff, I'm going to want to make sure I can get it out so bits of it doesn't migrate through the body of the guitar as I move it around. 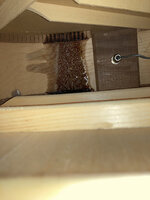 I'd check to see that it had hardened and the abrade it with a drummer fitted with a wire brush, taking care to vacuum the dust because it's an irritant. If it's sticky, then I'd scrape with a chisel, bit through the hole it will be hard work.
0

rob aylestone said:
I'd check to see that it had hardened and the abrade it with a drummer fitted with a wire brush, taking care to vacuum the dust because it's an irritant. If it's sticky, then I'd scrape with a chisel, bit through the hole it will be hard work.
Click to expand...

Like I said, the consistency is that of honey once it's crystalized in a jar, if you've ever seen that. It's not hard but it's not runny or a gel like it was in the original package. I think I'll have to scrape it with a plastic/wooden tool and then somehow make sure I get what I scrape-up out of the body. Thanks for the suggestion.
R

I'm no use with hollow body work at all as my hands are so big. I hope you get it sorted. Maybe, if it stabilises and remains hard, it could just be best left alone?
0

Well, I spent two hours at it. I started-out using a spoon and it turned-out the consistency was much more like honey than I thought. There was nothing to vaccuum and I was sort of horrified to see a big blob of the stuff lying on the back panel, which I'm fairly certain happened since I brought the guitar home and left it in the case lying on its back.

After a certain point, I realized I was just moving stuff around with the spoon, so I grabbed some gun cleaning supplies I had (e.g. cotten patches and long cotten swabs) and used those to try sopping-up the goo. Then I moved to some cut-up old t-shirts wrapped around a spoon and did that for a while. When I thought I got all I could, I cleaned some more. And then when I thought I was done, I cleaned some more.

It looks like there's still some remnants in the linings but I have no idea how to address. It's hard enough not being able to get my hand in but I can't see it either. It's all by feel. Anyway, I'm putting new strings on. When I switch the strings out again and I'll see what's going on. In the mean time I'll se sure to store the guitar in it's case in the same position it was in so whatever's left doesn't move to unaffected places.

1) This is the original picture. You can't see the blob that's obstructed by the brace on the left. 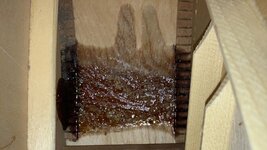 2) This is after I started scraping with a spoon. You can see the dark blob on the left laying on the back panel. I pulled that out with the spoon in one stroke.

3) This is when I could tell the spoon wasn't doing much but moving stuff around and I moved to patches and cloth. 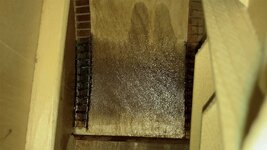 4) This is the final situation. It's an oily substance and shiny. I don't think there's anything significant on the surfaces, but it's the stuff in the linings that concerns me but I can't get at it.
R

Researching the stuff reveals it to remain active for a long time, and oddly carry on doing its job. Once it’s removed moisture it goes hard and becomes stable. I guess the issue is that in the area it is, it’s removed moisture from the joints, if there was any excess still in them. It’s not for me to give advice to an owner, but I know what I’d do. Keep the guitar at home, in the dry and the warm, and avoid changes in air dryness so as not to trigger any more chemical changes. It wouldn’t bother me taking it to a gig but it wouldn’t be outside in a damp location any more. Ever.
0

rob aylestone said:
Researching the stuff reveals it to remain active for a long time, and oddly carry on doing its job. Once it’s removed moisture it goes hard and becomes stable. I guess the issue is that in the area it is, it’s removed moisture from the joints, if there was any excess still in them. It’s not for me to give advice to an owner, but I know what I’d do. Keep the guitar at home, in the dry and the warm, and avoid changes in air dryness so as not to trigger any more chemical changes. It wouldn’t bother me taking it to a gig but it wouldn’t be outside in a damp location any more. Ever.
Click to expand...

I just have to accept the situation and hope for the best. Short of paying someone with the skill to get in and remove every last bit, that's all I can do. The guitar has mostly sentimental value being the first guitar I'd ever bought on my own, but it probably wouldn't make financial sense to have a pro get into it. I mostly play my 6-string Martin nowadays, and I used this humidipak system with that guitar as well, so from a monetary stand-point, I should be glad this didn't happen in that guitar.

Have you contacted D'Addario? Ask them what is in the humidipak and ask for recommendations on removal of the residue. Surely they have dealt with this in the past. Its not the first time I've heard of someone's Humidipak leaking.

Some of these systems use salts, as certain ones have a very specific range of humification. They will absorb and release moisture over very specific ranges. I used to calibrate the hygrometer at work using a couple of salts. Its like testing a thermometer by checking water's freezing and boiling points.

What Talisman said...It appears you are not alone...Here's a thread on it and at the bottom the one guy said D'addario bought him a new case... For sure they can tell you what to use..My first thought as someone who grew up finishing hardwood floors was trying to use maybe a wood paint stirrer (the flat end part) with some clean cloth rag / towel material tied on the end. Dipped into a cup of lacquer thinner or acetone and then squeezed out so it is not dripping wet to clean it up ..As long as the rag isn't dripping wet it will most likely cut the goo slowly and not penetrate too deeply to damage the wood... I'd call D'addario first though and see what they are willing to do to help you out...
0

I've submitting a question to them. I'll follow-up if anything comes from it. Thanks for all the advice and suggestions.
0

Update: I submitted a request for more information through the D'Addario website. They got back to me quickly and offered to help me try to make a claim, but I'd thrown out the damaged packs, so couldn't really make one. Instead I just asked for more information on the packs. This is what I got.

Relevant parts of the first email

Thanks for reaching out, and I’m very sorry about that! The contents of the humidipaks are made up of a salt water and natural gum solution. If you can reach, the residue can be soaked up using a paper towel.
Click to expand...

The residue inside of the guitar will likely continue to dry, and will start to become more crystalized and flaky (which is a result of the water evaporating out of the salt – leaving salty type crystals behind, which may need to be chipped or cleaned off. I would definitely recommend getting as much off as possible to avoid further damage as it continues to dry. There may be some minor warping depending on how much actually soaked into the wood- but it is difficult to determine what will happen as it continues to dry, since it’s hard to know how much actually made it into the wood and where. My best recommendation would be to get as much off, and dry it as much as possible to reduce the amount of potential damage.
Click to expand...

As a couple of notes as well if you plan to continue using the humidipaks on any other instruments as well – the humidipaks typically only last about 4-6 months before they need to be replaced. The packs will sometimes become hard once they’ve worn out, but this doesn’t always happen (especially in higher humidity environments, as they will soak up some of the moisture instead of dispensing it, causing them to not dry out in that way). Regardless though, the packs still begin to wear out after 4-6 months, so a good rule of thumb is to replace the packs every 6 months, or when they become hard, whichever comes first!

Simultaneously, we recommend storing the case lying flat (not propped up or on it’s side) when using humidipaks. This allows the packs to rest gently in the sound hole, and helps prevent them from being pulled down towards the base of the guitar, which can cause them to bend/crimp (which can also cause damage to the packs).
Click to expand...

That last part is important for my situation as the guitar was stored upright at an angle, which would've resulted in the second situation.

Not to excuse the manufacturer, but in retrospect I'm kind of surprised I used the product in general. Hanging something containing a liquid/gel substance inside a wooden guitar isn't anything I'm interested in doing again. I'll look for another solution. I'm thankful this was a 30 year old guitar that I used thoroughly and banged-up so much that it probably doesn't have a resale value of more than $100 at most. I think it'll survive the rest of my life given the effort I went to in cleaning it.
You must log in or register to reply here.
Share:
Facebook Twitter Reddit Pinterest Tumblr WhatsApp Email Share Link
Top