Hi, I just bought a Fostex x28 unit from a woman who have had it since the 90's but not really used it. She said a professional musician had borrowed and used it recently and it worked fine. When I turn it on it also seems that way, the tape is running and rewinding perfectly, the sound is coming clean through the mixing unit, all the controls seems to be in order, but there is one problem, it doesn't record. I have found the manual online and i am pretty sure I am doing the right thing. My intuition tells me that it is either an electronic problem, that somehow the signal path is cut somewhere between mixing unit and the tape head for recording, or that it is a problem with the tape head it self. I don't have much experience with tape recording so it is hard for me to asses, but when i look at the tape head it seems a bit worn down (see the picture). Unfortunately, i only have new tape without recordings on it so it is hard to test playback of the tape. However, there are a lot of noise on the four channels when i play an empty tape and when i turn the pitch control i can hear the corresponding change in the noise, which suggests that the noise is, at least partly, coming from the playback of the tape. The noise is a bit different on some of the tracks. I don't know if this could mean that some of the noise comes from the tape head?

Anyway, the woman I bought the unit from, says that if it doesn't work she would happily take it back and give me a refund, but she would also be willing to give me back some of the money (making it cheaper for me) if i want to keep it and see if i can fix the problem. So I am asking for help to asses wether this is some issue worth dealing with? And if so, hopefully get suggestions on what might be the problem and how to fix it. 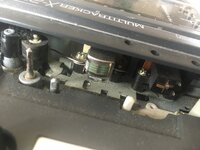