When I was recording my first CD, I needed a classical guitar for a session guy who was flying in with 2 electrics. I bought an Epiphone Selena signature guitar, used, which was adequate for the one cut we needed it on. I ended up trading it to my brother, who had an old Yamaha G65A, which had been leaning in the corner collecting dust for 20 years or so. Intended as a cheap student guitar, it was made in Taiwan about 1972. It is entirely laminated- back, sides, and top. I think that the general belief of luthiers was, and is, that the glues and cross-grain laminations would prevent such a guitar from absorbing the finish, so it would never get that vintage sound mojo, and would always sound like a cheap plywood guitar. Well, they were, and are, dead wrong! When it came into my hands, after I scraped off about 4" of dust and pet hair, I found that the neck had separated from the body at the heel, and I had to have the neck reset. Fortunately, the neck remains straight, and the intonation is excellent. What shocked me is that it has gained that vintage sustain, and the richness of tone that you associate with a truly vintage axe. I think the only reason it survived the dents, gouges, abuse, and neglect it suffered was *because* it's made out of plywood. You can find these on line for $200 or less, in much better condition than mine, but I don't know if this one was the one in a million they made right, or whether they are simply great guitars that no one loves because they heard it was laminated, and just presumed that it sucks. One thing's for sure- I'll be using it, among other instruments, on my second CD. As I've often said before, anyone can buy a $5,000 guitar that doesn't suck. Walk into a big music store and wave $5,000. It may not be the guitar you need and it may be wrong for you, but it probably won't suck. It takes luck, skill, and perseverance, to find a $100 guitar that doesn't suck.
R

My plywood double bass is a little weak in the room - but records nicely!
O

Plywood if of quality which musical instruments should be made of, is stronger than 'real wood'.

The wood plys should be of a descent enough thickness so that the glues should never affect the other side of the wood veneer. If the glue is affecting the opposite side then at one time someone must have been a bit over active when sanding the wood veneer.

Glue does have a shelf life, but wood can easily and cheaply be re-glued if done by someone who knows how.

1972 is only 50 years ago. Some plywood or veneered furniture is 3 times that or more. So 50 years is nothing to quality plywood.

Proper 'Marine Ply' is used to make boats and has warranty's of 20 years or more and that is for being submerged in salt water all that time and subject to parasite attack.

Dents could affect the sound of an acoustic guitar as could other damage.

On an electric guitar there would be no difference in sound.
N

Plywood may be stronger, if done correctly, but it generally doesn't have the resonance that one wants for an acoustic (or electric) instrument.
N

rob aylestone said:
My plywood double bass is a little weak in the room - but records nicely!
Click to expand...

notCardio said:
Plywood may be stronger, if done correctly, but it generally doesn't have the resonance that one wants for an acoustic (or electric) instrument.
Click to expand...

Why?..............Every single piece of wood is different. Different density, different flexibility, even if off the same tree.

So how is a piece of plywood any different especially when added to the make up of the instrument, the deign and manufacture of that instrument.

So why is plywood no good?

Laminate bodies aren't made to make cheap sounding guitars. I've got 3 laminate guitars, and all sound just fine. This isn't anything like the plywood you buy at Home Depot. I've watched the tops being made for semi=hollow guitars. They chose the type of wood, maple, basswood, cedar. They are put together in shop. Laminates have a different tone, of course, but also tend to minimize feedback, especially with electric guitars.
R

All I'm saying is that plywood isn't usually cited as a tonewood, and in the day, wasn't expected to improve with age. And of course, many hollowbodies and thin bodied electric-acoustics have laminated tops, but I don't think of that as a feature of classic arched-top acoustics. Once magnetic pickups are involved, it's a whole different ballgame.
O

The wood, plastic, metal, resin or whatever the 'electric' guitar is made out of has the tiniest effect on the 'electric guitar' sound. Barely audible.

'Tonewood' as it is called is one of those 'myths' with electric guitars.

With acoustic guitars what the guitar is made from and how it is assembled has a huge effect on the sound.
O

Richard Monroe said:
All I'm saying is that plywood isn't usually cited as a tonewood, and in the day, wasn't expected to improve with age. And of course, many hollowbodies and thin bodied electric-acoustics have laminated tops, but I don't think of that as a feature of classic arched-top acoustics. Once magnetic pickups are involved, it's a whole different ballgame.
Click to expand...

Richard wood or 'real wood' is constantly moving depending on the environment. It is affected by air moisture and heat greatly. It will absorb amounts of moisture from the air and then dry out when the air is dryer and less moist.

So the real wood will give you different tones all the time in acoustic guitars.

Plywood will as well but to a much less and different degree. Plywood is more stable because the grains of the wood are laid across each other for strength and also to keep movement of expansion and contraction to a minimum.
R

Orson- I'm well aware of the quirks of wood. I build wooden arrows for world-class archery competition, an almost lost art. A few traditional divisions still require them. Humidity has a huge effect, just like on guitars. I'm also aware of the inherent increased stability of laminates. Yes, there are wooden laminated arrow shafts. In the end, I know more about arrows than guitars. I'm also old enough to own a couple of vintage guitars that I bought brand new, and I've heard their sound change over the years (or is it just that I can't hear those annoying highs anymore? Beats me).
R

One of these!
Three years old now and I love it!
Thomann Double Bass
R

I think maybe laminates are simply too rigid. when you tap a ply large surface - the sound really is different. Solid wood, tends to be less rigid which gives a braceless panel a tone of it's own. The trouble is, that can be better or worse than ply. Torsionally - ply is stable. Solid timber can rot, warp and of course have variable density. So when a person making a guitar picks up each sheet of timber in the store room - touch and feel probably tell him/her how good that individual piece of timber is - and if it's 50 years old and still warp free - it's good for an instrument. An expert might be able to tell if a warp is finished, and now stable? So it could save work in calving wood away. It will certainly be individual - and hopefully on completion, nice sounding. Ply has the advantage it can be used in mass produced, or medium run instrument building. I have two similar Les Pauls - but one must have different wood as it's heavier. This is black - so no idea what's under the finish. It does sound different. Not sure if it's better, just different.

I've played guitars that were very similar in construction, with the exception that one was carved, the other laminate. In terms of sheer volume, the carved top was louder, but I thought the laminate version had a more balanced tone. It depends on what sound you are wanting. Its not a case of being right or wrong, as Rob says, it's just different.
R

Ply is also age stable - my wife bought me an Eko 12 string in 1980. We had no money then so it was not mega expensive - it's still as straight and flat as it was when new - I bet a non-laminated one would be bent to hell by now! I really must put some new strings on it. It's hardly ever played so I reckon maybe 3 of the higher strings over it's life - playing now leaves rust grooves in your finger tips and the string slide noise is a sound effect - but it's almost in tune!
O

Plywood is wood peeled from a tree then dried and then the wood is is turned around and the grain of the wood put across the grain of other sheets of wood and glued together.

This stops one sheet of wood trying to move because it is glued to others.

A single sheet/plank of wood will always try to move as it dries and contracts and then as it swells and expands. Also with hardwoods especially, unless they are intensively managed, they will have 'natural' stresses in the wood which will make the wood want to turn or twist a certain way.

The ideal tree, is a tree which grows perfectly straight and directly upwards. But most hardwood trees lean or have heavy branches that get caught by the wind. The tree counteracts all of this by growing branches in other directions etc. This all puts natural stresses in the wood when cut and planked. So unless screwed down and held as in a piece of furniture, your piece of wood will be always moving when the humidity and temperature changes, or a hole is cut, or an unseen split occurs, etc.

rob aylestone said:
One of these!
Three years old now and I love it!
Click to expand... 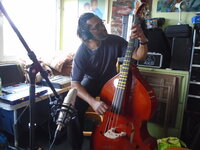 Mines a cheap thing that I bought back in 2012 after 8 years looking for a decent VSTi, having sold my previous one. I don't know if it's made of ply or some tree that fell down in some Norwegian wood inhabited by trolls ~ but I do love it too.
D

grimtraveller said:
View attachment 111751Mines a cheap thing that I bought back in 2012 after 8 years looking for a decent VSTi, having sold my previous one. I don't know if it's made of ply or some tree that fell down in some Norwegian wood inhabited by trolls ~ but I do love it too.
Click to expand...

grimtraveller said:
View attachment 111751Mines a cheap thing that I bought back in 2012 after 8 years looking for a decent VSTi, having sold my previous one. I don't know if it's made of ply or some tree that fell down in some Norwegian wood inhabited by trolls ~ but I do love it too.
Click to expand...