The Tascam MS-16 was made as a single-speed machine, 15 or 30ips but not both.
Interestingly, the capstan servo can run (by changing jumpers) at 7.5, 15, or 30 ips. I have modified my machine with a DP3T switch on the outside to do this, for varispeed FX.

However, the audio cards do not implement switching of EQ time constants as would be necessary for the machine to correctly record and play back at more than one speed. (I believe the ATR60-16, a more "pro" model based on the same transport, does, but I have not worked on one.) If you merely changed the capstan servo jumper, the record & playback frequency response of the machine would be completely skewed and probably not correctable with the EQ trimmers.

MS-16s (and ATR60-16s) running at 30ips are known to have terrible bass response. Audio is cleaner at 30ips, but computers exist for that purpose. Also, few would entertain the notion of blowing through a (2016) $170 reel of tape in ~16 minutes. For this reason, I decided to attempt conversion of a 30ips machine to 15ips operation (the Internet doesn't seem to think you can do this.) Fortunately a factory 15ips machine was also on hand for comparison. It was simple to determine which components on the R/P amps were changed - all components were wave-soldered, except the ones relevant to the REC and PB EQ, which were visibly put in by hand at some point afterwards. (The caps and resistors were exactly the same style as the others, so I have no reason to believe this wasn't done by Teac)

Six jumper positions exist on the motor control board, labeled H (30ips), M, (15ips), L (7.5ips). (Two sets of HML, they select outputs on a CMOS counter IC to divide the reference frequency.) The 30ips machine will have jumpers at both "H" locations, to convert to 15, remove them and put jumpers on both "M" locations. I wanted to be able to play and record things at the wrong speed easily (this is, of course, one of the main reasons to own a tape recorder) so I wired the jumpers to a DP3T switch. I was concerned that extending the lines carrying the servo reference might cause square-wave noise to be picked up by the repro amps, but this did not occur.

The counter circuit must be modified or it will count one second for every two elapsed, or vice versa.
One jumper on the system control PCB tells the CPU what speed the deck is set up for.

The machine was shipped working at an operating level of 250nWb (+3dB over 185). I think Tascam suggests this for use with dbx noise reduction, probably for increased accuracy of NR tracking. This is the only reason I can think of to align the machine to +3 instead of +6, given that no current tape manufacturer produces anything less than a +6 level tape.

Unlike some other Tascams (38!!!) it easily has enough trimmer range to align the R/P electronics for an operating level of 355nWb or possibly even 500.

(Relevant components shown removed in the process of 30 -> 15 conversion, except R26, which was shorted with a jumper on the back of the PCB: jumper was removed)

Partial schematic and table of component values:
(all resistors 1/8 watt and all caps mylar/polyester, I used Wimas) 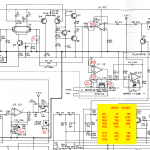 C42 feeds bias current to the record/sync head. If converting 30->15ips I would suggest leaving it as 360pF because, in stock 15ips configuration, the MS-16 just barely has enough bias available on the trimmer to bias high-output tapes such as SM900/ATR. With more bias current available, this is not a problem. It is also useful to increase the value of this cap on a stock 15ips machine.

After changing the 7/8 components on each R/P amp card, you must of course align the machine to the new calibration tape. After doing this, I was able to get a very flat freq response. Bias required was somewhat more than expected - around 4-5dB past the peak at 10K using SM911@15ips. Low-end was flattest overall when the head bump around 50Hz was adjusted to peak at +1.5dB.

Ooh, interesting. I hope people find it useful.
(Eagerly awaiting another album)
A

Can anyone tell me what resistor values “47” and “750” are? If I get there wrong, it’ll mess up the sound of my tape machine.

AnalogApples said:
Can anyone tell me what resistor values “47” and “750” are? If I get there wrong, it’ll mess up the sound of my tape machine.
Click to expand...

Generally if there's no modifier such as K or M, that means it's just in Ohms. (I have checked, 47 and 750 Ohm resistors are definitely a thing)

EDIT: If you want to double-check, see what the values of the existing resistors are: if we're reading this right they should be 150 and 390 Ohms respectively.
A

Uh oh, he also did not list the voltages required for the two capacitors to be replaced on each board. I need to order some 273 caps and 472 caps, but what voltage?

The schematic has 16v caps and 25v caps. Does anyone know what voltage caps to buy?

AnalogApples said:
Uh oh, he also did not list the voltages required for the two capacitors to be replaced on each board. I need to order some 273 caps and 472 caps, but what voltage?
The schematic has 16v caps and 25v caps. Does anyone know what voltage caps to buy?
Click to expand...

The service manual lists the voltages for the components in the back (and yes, it confirms that those resistors are 47 Ohm and 750 Ohm).
C10 and C21 are 100V mylar capacitors (I think even 50V would smoke those op-amps so that's way overkill). C42 is polyester and it's also rated 100V.

50V to 100 V Mylar or Polyester caps would be fine. They are just that voltage because they do not choose to make 16V or 25V Mylar caps. The 600 V ones might be too large but they would still work.
Sometimes with parts you have to use what is available and that happens in manufacturing as well as repair.
J

Sorry to revive a dead thread.. Long time MS-16 user here. I owned a 15ips model for years, (stupidly) sold it, and have just acquired a 30ips machine that has seen very little use. Probably would not have considered buying it otherwise, and the 30ips situation would have been an absolute deal breaker had I not found this thread. Going to do the mod before the years end and will report back! Thanks for this write up, pdmillar.