WTF? Seemingly "normal" dude breaks through the security line and runs straight into the fire? Didn't the same thing happen just last year, or the year before? 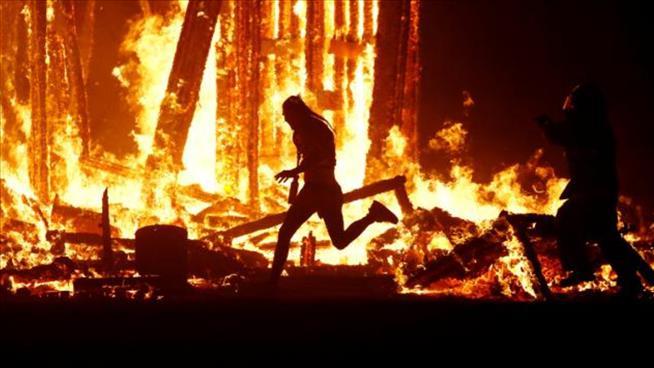 WTH is this thing all about? Anybody here ever attended? I know they have a bunch of hot chicks running around in the desert half nekit, other than that, what's the deal? Are they on the pot or what? What would cause someone to choose such a horrible death?

At least there's truth in advertising when it comes to this festival.

Are they on the pot or what?
Click to expand...

They're definitely on pot.

I thought that was the best/funniest story...they really had a "burning man".

It's one thing if it was an accident, then you feel sorry...but when idiots run into a raging fire to prove something...fuck 'em.
It's like all those "Jackass" videos.
Apparently every year there's a few who run at the fire to try and grab some of the burning pieces as "souvenirs"

It's primarily and artsy event, with lots of free-form self-expression...the modern day flower-children...but the burning man thing probably comes from some pagan ritual.
There is an older movie with Christopher Lee called "The Wicker Man" that portrays the rituals performed at the summer solstice...and the final act is to burn offerings inside a giant man made of wicker/willow sticks....only they decide to make a more serious offering in the movie.
I won't spoil the ending if anyone wants to watch it. It's actually not too bad a movie...not like your typical Christopher Lee horror schmaltz.

There was a remake with Nicolas Cage...so you know it must really suck!