spantini said:
That's ok. I'm hanging on to the faster than a speeding bullet part 'cause i watch the old Superman TV series every weekend View attachment 114143
Click to expand...

Man I loved watching him as a kid...definitely had the towel with the wood clothes pin holding it together as a cape thing going on several times...what crazy cool innocent times...Jimmy and Lois were awesome too!

ambiguous group of one

I'm Curious. Do I mix CBG or CBD with the bleach?

You mix it with the vaccines to make them work.

The oils in pot smoke coat the alveolar sac's in the lungs. Thus creating a protective barrier in the pulmonary system in which the virus cannot cross.

What? What happened to the 'new research'? 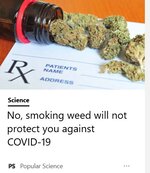 It was too good to be true.
O

Does smoking pot cause lung cancer?

Or a heart attack, on account of all the Cheetos?

Of coarse not! You think I'd smoke a deadly poison...

Based upon my very close friend who smoked a ton of pot and never smoked tobacco one would think yes...but...his doctors said nope pot is not known to cause lung cancer. Though one would certainly think breathing a bunch of smoke into your lungs day in and day out for 40+ years might. I think the doctor was wrong but that's just my observation and practical thinking being as lung cancer was not inherent in his family tree. TBH God only knows exactly what was sprayed on the 40 years of pot he smoked. Paraquat or other herbicide or insecticides may have contributed to his dilemma. Crazy he was in a particular 5% genetic group where this cancer cure therapy worked but by the time they realized and started him on the protocol it had metastasized and gotten to his brain...screwed up shit. Man I loved and miss that dude.. Circa 1980 ...The Coyote his beautiful wife Nancy and Ozzy the smiling dog. Digging up this picture I stumbled upon an old video of the Rock celebration party we put on when we thought he'd beaten the cancer....Shitty video but damn for a bunch of old farts ( 10 years ago ) we were laying it down pretty finely.... I'll have to upload it to the Youtube and share it here. 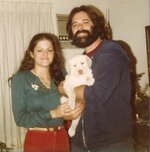 LazerBeakShiek said:
Of coarse not! You think I'd smoke a deadly poison...
Click to expand...

LazerBeakShiek said:
Of coarse not! You think I'd smoke a deadly poison...
Click to expand...

That's part of the point of it all, yeah? Rounds off the rough edges, the coarseness if you will. At least that's what they say. Not for me, however. I wish sometimes I could still smoke it, makes me tragic. I tried smoking less of it, maybe I was getting too high. Tried smoking more of it, maybe I wasn't getting high enough. Nope. As long as I avoid hanging with the biker crowd where taking a pass could cause suspicion and a danger to your overall health, i'm good.

I have to laugh at the discussion of smoking pot as being helpful or hurtful. It goes both ways depending upon the body chemistry of the smoker. I smoked pot once, when I was 28 years old. I was fucked up for three days. Never smoked that shit again. But that was my body telling me, "This isn't good for you". Over the course of my life time I have had friends who smoked pot or snorted coke every day. All I know is that some of my friends are no longer alive, but I am.
O

60's guy said:
I have to laugh at the discussion of smoking pot as being helpful or hurtful. It goes both ways depending upon the body chemistry of the smoker. I smoked pot once, when I was 28 years old. I was fucked up for three days. Never smoked that shit again. But that was my body telling me, "This isn't good for you". Over the course of my life time I have had friends who smoked pot or snorted coke every day. All I know is that some of my friends are no longer alive, but I am.
Click to expand...

If I even take an Asprin it will affect me. In away I am kind of envious of people who can do things like smoke the weed.
Last edited: Sunday at 4:37 PM

I smoked from roughly the age of 13 until about 35(?). First sign it was probably time to knock that shit off, had a "panic attack" one night. This was before having a panic attack was a thing, never heard of it. Mid 90s? I used to enjoy getting high right before going to bed. The reason, it wasn't really lucid dreaming, but watching what the mind does in that period between awake and sleep....like a damn Dali painting in motion. My heart began to race and I started to think about me innards, ain't nothing in there but a bunch of tubes keeping you alive. It was like fight or flight kicked in, and something inside told me to run!...reassurance that I was alive. I've never been afraid of death, it was weird. Started thinking I was going to have a heart attack and felt bad for my wife that she would wake with me there in the bed...dead. Which only made it worse. Got up, got my shit together, and went back to bed. Started all over again. Woke the wife, she called rescue. By the time they got there I was cool as a cucumber. They probably suspected coke. I thought it was a one off, though maybe not to that degree it happened again, more than once. It was unpredictable. Smoking pot just wasn't fun anymore. Truth is it probably started not being fun long before that began to happen, it was just a habit, a vice. Although I kind enjoy the smell, and kind of wish I could partake when others are, overall I don't miss it.

They say cannabinoids or whatever have health benefits. It used to be that they helped those going through cancer treatment maintain an appetite. But now it goes far beyond that. I haven't taken a deep dive into any supporting evidence, but I believe it. You don't have to smoke it, they have edible gummies and such these days. They say the gummies are a clean high and maybe I should try them. So far i've taken a pass.
O

I remember as a kid in the 60's you could get the seeds from out of packets of bird seed, or so some people claimed. But after listening to all the arguments on the tele about drugs and stuff. About 10 or more years ago I found some old government information films and was quite amazed at what had gone on.

Apparently in WW2 there was a huge demand for all things obviously. One of those things was 'rope'. So this government film was about encouraging land owners to grow as much hemp as possible to meet the rope demands. Apparently 'hemp' was used for everything in days of old. Rope, clothes, sacks, paper, etc etc etc. You name it and hemp was used for it or as part of it. The thing about hemp was that it grows super fast and quite easily and cheaply.

But the crux of this post is that after those films there were other films made after the war. These government films were now condemning hemp and showing fields of it being burnt by government agencies. It was evil and nasty and the cause of all the problems in the world and this is just a few years after the war. Not the 1960's.

The truth of it I haven't a clue....imagine a bunch of stoners hashing this one out.

The theory may have even been promoted by the magazine High Times....

Supposedly one of the huge politically influential corporations, Dupont maybe?...they developed synthetic fiber, used in such things as rope. In order to corner the market and knock out competition from natural hemp fiber they used their influence to make pot illegal....and by extension hemp. Remember the propaganda film Reefer Madness? Marijuana will make you jump out of a window, they said! I don't know about all that nonsense. Sure, it might make you unnecessarily call the rescue squad, but...

Hell, even George Washington The Father of our Country grew lots of hemp. It is said Ol' Louis Armstrong stayed high off reefer 'bout all the time, especially when performing. That smile.

There was a bunch of hemp grown in this area for the war effort in the 40s. We used to see fields of it growing wild along roads when we went to a couple of lakes as kids. I don't know if it was the type with large amounts of THC, or it was like the commercial hemp of today which has virtually no THC.

As far as medical purposes, it's been quiiite a while(probably 1990s) so i'm going by somewhat vague memory. This child had epilepsy if I recall correctly, and was having horrible seizures with devastating frequency. Multiple times a day, and night. I can't remember how it was administered, but "medical" marijuana while not a cure made life livable. It didn't make him high, however that works, but it was a near miracle. I can understand the need for caution to regulate so whacko parents don't start abusing it as a cure-all for their children. But cases such as that kid who it absolutely no doubt helped, the government should relax and butt the hell out.
You must log in or register to reply here.
Share:
Facebook Twitter Reddit Pinterest Tumblr WhatsApp Email Share Link
Top