Pleasae skip this topic, but I needed to just say this - even when we knew it was coming - it was a shock to lose my best mate Ian Baker this morning. At least he got to listen to the tracks I managed to get up before he passed. I saw him in hospital on Friday and his vision had started to go, but I didn't expect it to happen so quickly. His life was the band really. Best bunch I've worked with ever. Can't be that many bands that never had rows, or put on parts, but we really did like each other. 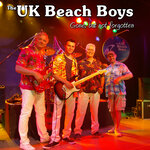 Sorry to hear about your friend's passing. Even when it's inevitable, it still leaves a hole in your life.
R

So sorry, I understand losing those close to you.

You can only lose your best friend once. Thank goodness.

Try not to make sense of it all.

Sorry for your loss Rob. Sounds like he was much loved.

Sorry to hear this. Hang in there.

He told stories - usually ones we'd all heard before and they got us into trouble so many times - l mean stuff like he booked hotels, but would start at the gig location, and use a major chain - there would be no rooms, so he'd use the nearest function, and they would be full. It was common for us to type in a post code and discover the hotel he had booked was three hours the wrong way! Or the time we stood at check-in at Berlin airport, and the lady said "Did you pack the case yourself sir?" and as he was in mid-story, he turned to her, said no, then carried on with the story. "No? Sir - did you pack the case yourself?" - Again, he said no and continued. "Sir, do you know what is in the case?" No he said, I just told everyone to put in whatever they liked because there was plenty of space...." We last saw him being marched off by two guys with machine guns - still saying "what have I done?" He also had huge cheek - he'd contact the airport and always manage to get special treatment through the system. We'd arrive and he'd have a name. This person would turn up and take us through the staff security and back of house corridors. I have no idea how he did this? Just cheek I think. Good times. I'll miss them!

Sounds like a fun guy. Sorry to hear of your friend's passing.

Shit man, I am so sorry. My best to you and your friend. It never gets easier losing those close to you....
R

I would want to be remembered, the way you remember your friend.
E

Sorry for you Rob.

Which one is Ian, Rob?
R

dark shirt, second from right - grey hair like me.

Always hard to lose someone close. You just have to remember the good times you had together, Rob.

It's a mind bender for sure.....
No words can take away the pain of the loss that we feel as we work though adjusting to the new reality. I've lost a couple best buds and it just plain sucks. Time softens that pain but it takes time. A ton of love and good karma heading out to you and all of your friends loved ones as you work through this sad time.

My condolences also. The world doesn't need to lose any more musicians.

A good friend is a precious thing. Glad for your time together, and sorry for your loss.