Noticed that they killed the Jokes! thread when they cleaned up. Don't know if that was intentional to keep my warped sense of humor away...but I'll try to start it off.

Why did the capacitor kiss the diode?
He just couldn't resistor.

...and for you PinkZeppelin fans:

Two guys were hiking through the forest. Suddenly, a large bear appears and growls. One hiker immediately sits down, removes his hiking
shoes and puts on his running shoes from his pack. The other hiker says, "Those won't help. You can't outrun a bear." The first hiker replies,
"I don't have to outrun the bear. I only have to outrun you."

Atheist is out for a stroll in the woods when he comes upon a bear. He runs as hard as he can, but trips and lands completely sprawled out on the ground.
Suddenly he screams, "God, I've never believed in you, but if you exist, make this bear a Christian." Time stands still as his request is yelled at the sky.. everything around him slows to a crawl as the bear runs up in slow motion.
The bear stops right next to him, kneels down on two legs, folds the front paws together, bows his head, and as time resumes it's normal rate the bear says, "Father we thank you for this blessing we are about to eat, Amen"...

Bear walks into a bar and says, "Bartender get me a beer!"
Bartender says, "Sorry, we don't serve bears beer in this bar."
Bear retorts, "See the lady at the end of the bar...if I don't get a beer by the count of three, I'm going to go down there and eat her."
ONE
TWO
THREE!
...and the bear goes to the end of the bar and eats the lady.
As he returns to his stool, he says, "NOW! Get me a beer!"
The bartender calmly replies, "Sorry, we don't serve bears beer in this bar."
Bear growls out, "Okay, then you'll be next."
Bartender says, "I have nothing to fear. You'll be sound asleep soon"
Bear asks, "Why would you say that?"
"That was a bar bitch you ate."

Termite walks into a bar: "Is the bar tender here?"

Sorry but based on the input so far, this thread deserves to die too.

spantini said:
Termite walks into a bar: "Is the bar tender here?"
Click to expand...

Snail comes into a bar, finally gets up to ask for a beer....the bartender nods to the bouncer and the has bouncer toss the Snail out to the curb. About a week later the Snail is back and asks the bartender "what'd you do that for?"

Two guys were picked up by the cops for smoking crack and appeared in court before the judge. The judge said, "You seem like nice young men, and I'd like to give you a second chance rather than jail time. I want you to go out this weekend and try to show others the evils of drug use and persuade them to give up drugs forever. I'll see you back in court Monday."
Monday, the two guys were in court, and the judge said to the first one, "How did you do over the weekend?"
"Well, your honor, I persuaded 17 people to give up drugs forever."
"17 people? That's wonderful. What did you tell them?"
"I used a diagram, your honor. I drew two circles like this: O o and told them this (the big circle) is your brain before drugs and this (small circle)is your brain after drugs."
"That's admirable," said the judge. "And you, how did you do?" (to the 2nd guy)
"Well, your honor, I persuaded 156 people to give up drugs forever."
"156 people! That's amazing! How did you manage to do that!"
"Well, I used the same two circles. I pointed to the small circle and told them, "This is your a--hole before prison...."

My wife had a DNA check on our son. She found out he has none of our genetic markers and came and asked me what we should do...

I asked her if she remembered the day of his birth. She said yes, what's that got to do with this?

I reminded her that on the way out of the hospital the baby pooped, and she told me to go and change him...So I left him there and got a clean one.

Arizona bikers were riding South on the US-93 when they saw a girl about to jump off the Hoover Dam Bridge.

So they stopped. George, their leader, a big burly man of 53, gets off his Harley, walks through a group of gawkers, past the State Trooper who was trying to talk her down off the railing, and says, "Hey Baby..... whatcha doin' up there on that railin'?"

While he didn't want to appear "sensitive," George also didn't want to miss this "be-a-legend" opportunity either so he asked ..."Well, before you jump, Honey-Babe...why don't you give ole George here your best last kiss?"

So, with no hesitation at all, she leaned back over the railing and did just that ... and it was a long, deep, lingering
kiss followed immediately by another even better one.

After they breathlessly finished, George gets a big thumbs-up approval from his biker-buddies, the onlookers, and even the State Trooper, and then says, "Wow! That was the best kiss I have ever had, Honey! That's a real talent you're wasting, Sugar Shorts. You could be famous if you rode with me. Why are you committing suicide?"

It's unclear whether he fell over or jumped.

What did Mick Jagger say when he saw Hugh Heffner having sex with Dennis Weaver?


Hey Hey, Hugh Hugh, Get off of McCloud!

Bu I'll just let that Be.

Bob left work one Friday evening.
But it was payday, so instead of going home, he stayed out the entire weekend partying with his mates and spending his entire wages.
When he finally appeared at home on Sunday night, he was confronted by his angry wife and was barraged for nearly two hours with a tirade befitting his actions. Finally his wife stopped the nagging and said to him, "How would you like it if you didn't see me for two or three days?"
He replied, "That would be fine with me."
Monday went by and he didn't see his wife.
Tuesday and Wednesday came and went with the same results.
But on Thursday, the swelling went down just enough where he could see her a little out of the corner of his left eye.

I didn't want to believe my friend was stealing from his job as a road worker, but when I walked into his garage all the signs were there...

How can people claim they know nothing...if you know it, it's something.

I keep putting off going to Procrastinators' Anonymous.

I joined Agoraphobics' Anonymous, but I'm afraid to go to the meetings... 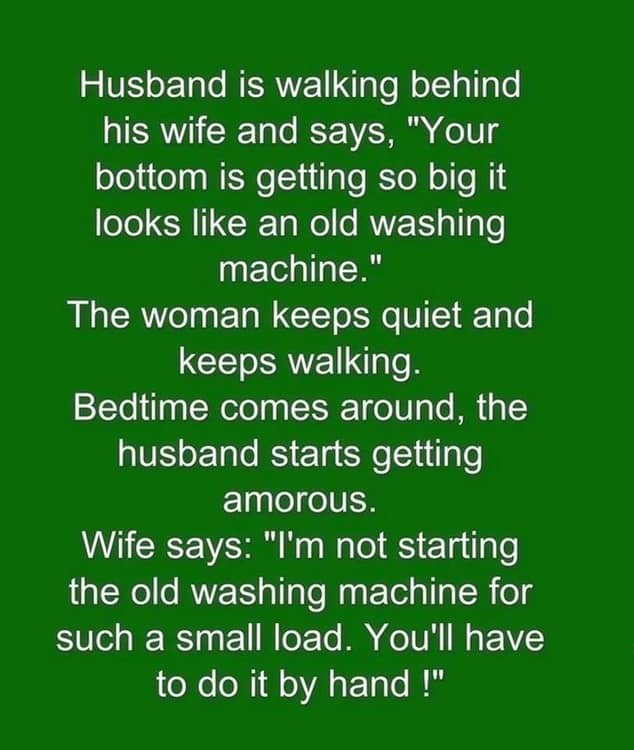 A "post retirement" couple were visiting their neighbors. The husband was describing this new restaurant they just found. "It's across town, best steaks I've had in years...lemme think of it's name...uh, it's..it's ..darn, it's on the tip of my tongue"..then to the neighbor he asks "What's that red rose that smells so nice? " A rose? Says the neighbor. "Yeah, yeah that's it!" He turns to his wife, "Rose, what's the name of that restaurant?"

2 blonds sitting on a park bench. 1 asks the other, which do you think is further? Florida or the moon? The other replies "duh, you can see the moon."
R

A gentleman is on a train and a younger man asks him what time it is. He ignores the young man. The guy asks again, same result. Finally he says to the older man, "Have I done something to offend you?"

The gentleman says "No, it's not that. If I told you the time, you would thank me and then we would start to chat. We would then find we have much in common, and I would invite you to my home for dinner. At my home you would meet my beautiful daughter, fall in love with her and then ask me for permission to marry her. I would have to say no, and you would be crushed."

The young man says, "Why would you not want me to marry her, since we get along so well?"

All the members of the company's Board of Directors were called into the Chairman's office, one after another, until only Ted, the junior member, was left sitting outside.

Finally it was his turn to be summoned.

Ted entered the office to find the Chairman and the other four Directors seated at the far end of the boardroom table.

Ted was instructed to stand at the other end of the table, which he did.

The Chairman looked Ted squarely in the eye, and with a stern voice, he asked, "Have you ever had sex with my secretary, Miss Foyt?"

"Are you absolutely sure?" asked the chairman.

"Honest, I've never been close enough to even touch her!"

Found this old one the other day: 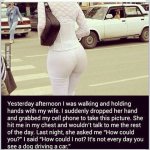