I did something stupid.

I ate a bowl of soup, and gave it a break while I did some serious political blogging on the innernetz(I didn't have any stir fry). So, a little later I decided to have some more soup. I went into the kitchen, grabbed my bowl off the countertop, and ate some more soup. I finished and went to put my bowl in the sink. Coming back through the dining room I noticed a bowl on the table, it was my bowl. So....

I ate soup out of the same bowl in which I had marinated raw chicken!

Stupid stupid stupid. I'm usually good about food safety, but this time after I dumped the chicken in the wok I failed to put the contaminated bowl in the sink and run some water in it. The net says it takes 12 to 72 hours before salmonella takes hold. I guess I feel okay so far, I feel a little queezy, but maybe that is just because I am grossed out. Am I gonna die? Give it to me straight, Doc, how long do I got?
M

A life time to contemplate the issue, but more importantly, how did the soup taste? Your mind can make you feel sick so start thinking that it never happened.
N

Well, let's just say you won't have to worry about dealing with the cpap anymore.

Mick Doobie said:
Am I gonna die?
Click to expand...

I appreciate the reassurance(s). Thanks, fellas!

My stomach has been a bit off kilter today. I could feel worse. Hoping I won't.

Weird how things work out sometimes. I was reading just the other day about some bright idea some cruizin' for a bruisin' types came up with to partake in the consumption of........................chicken sashimi. I shit you not.

IF you get salmonella, you will know it! A wonderful way to lose weight in a few days.

I'm supposed to go on an awesome fishing trip to the end of the earth tomorrow through the weekend. I gotta be honest, I feel like crap this morning, and did, a lot. Is there such thing as a mild salmonella or food poisoning, kind of like the 24 hour bug?

I got sick from raw oysters, was out for around 73 hrs. There ain't no in between. If you go fishing, you will be chumming most likely.

I call dibs on his gear.
M

ibleedburgundy said:
I call dibs on his gear.
Click to expand...

I live in Manassas, maybe we can split it!

It actually sucked pretty bad. The second time my intestine was so inflamed the doc at the emergency room said it was the worst he had ever seen.

ibleedburgundy said:
I call dibs on his gear.
Click to expand...

You won't be getting much, my brother. Last year(maybe the year before last), I went out around 2-4 am for some night fishing. I set up on a point with one rod and another rod about 50 feet away along the beach in some rough current with a lot of sandy ditches and troughs. I was reeling in something on the beach rod and looked over to see a boat move outside the boat channel and too close to the shore. He caught my line, and oh so slowly rod and reel were dragged into the water before I could get there. Nice Penn real and Zebco rod I had had for years, gone. I was pissed, but soldiered on. As the sun rose the point became crowded with jackasses, guys n gals "fishing" and drinking beer at 6 am. I moved on the other side of the bridge just outside the inlet. I still had 2 rods, one was set for casting, the other for bottom fishing, which I cast out and put in a rod holder. I walked about 20 feet away and began to cast. I caught a couple of small flounder fairly quickly. As I looked over while throwing a flounder back, there in the sand was my rod holder, rod and reel gone. Another Penn rod and reel, gone(I admit, I was tired and failed to set the drag properly for such an approach). 2 days earlier in the same spot i had caught a 36 inch Blue, and a 32 inch Drum, so who knows. It was a long ride home that morning. Salt water, sand, rain, jackasses who can't stay in the boat channel,...The wife felt sorry for me, so as I slept she went and purchased 2 cheap surf combos for me. Caught a variety of large and small fish, and rays, since, haven't had any problems with either combo. I still have some nice smaller rod and reels, though, for casting. But with those it's not a sit and wait game, you gotta kind of know how to use them.

You know how to fish? I mean fish-fish?

It actually sucked pretty bad. The second time my intestine was so inflamed the doc at the emergency room said it was the worst he had ever seen.
Click to expand...

Just out of curiosity, what made you decide to go to the dr, and how many days into it? From what i have read, it is mostly just a matter of riding it out, no pun intended.

Mick Doobie said:
Just out of curiosity, what made you decide to go to the dr, and how many days into it? From what i have read, it is mostly just a matter of riding it out, no pun intended.
Click to expand...

My stomach was super fucked up. I couldn't sleep and I was having sharp pains that were coming on in convulsions. It was really bad. I wasn't sure it was food poisoning at the time.

But yeah, the Doctors did basically nothing for me, but not before sticking a finger up my butt.

I know nothing about fishing. Wish I did. Haven't been fishing since I was a kid. Someday I will fish agin!

If at all possible I try to limit anyone sticking their finger up my butt to once a year. I ain't due yet. I hope I feel better by tomorrow morn, i hope. Outer Banks bound for the weekend.

Fishing is a lot of fun, dude. Fall can be great as they start moving around, migrating. If you were ever in the Tidewater area i'd hook you up, maybe. You never know, fishing. Regardless, a day on the water is never a bad thing. No boat though, don't want one. Kayaks, or surf, or pier.

I wish you well. In my experience, the "12 to 72 hours" rule is usually nearer the 12 hour part--so the fact you're still posting is a good sign. If the soup you put in the bowl was boiling hot that might have been enough to kill most of the little problems anyway.

Mick Doobie said:
I'm supposed to go on an awesome fishing trip to the end of the earth tomorrow through the weekend. I gotta be honest, I feel like crap this morning, and did, a lot. Is there such thing as a mild salmonella or food poisoning, kind of like the 24 hour bug?

Not salmonella, it takes a few days to go through your system - but you'd know if you have it, a lot of gut pain, and you won't feel like doing or eating anything.

It is a beautiful day. Winds will be switching from the S to the N-NE some time today. North of Hatteras Point(cape point) the land mass runs N-NW. Maybe the wind will push the baitfish to shore, making for potentially awesome fishing. "South" of The Point the land mass runs E to W, which is where I will be staying, so there is that option as well. It is beautiful down there. Peaceful, not tons of people. It is like the edge of the earth, jutting out into the Atlantic. Even if I catch little to nothing, it'll be great. Very happy and not feeling too bad this morn.

You guys have a good weekend. 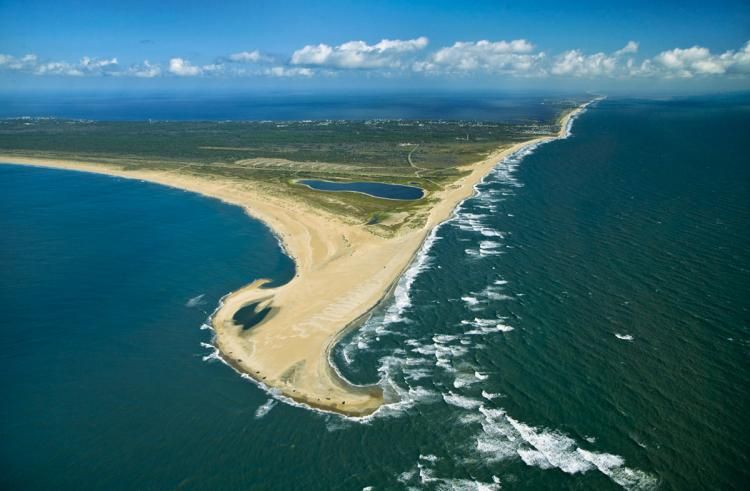 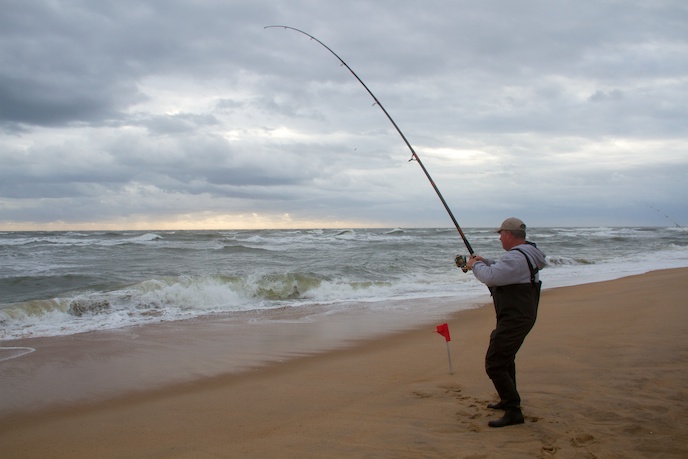